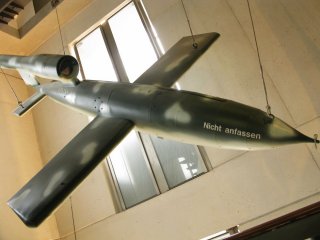 Here's What You Need to Remember: Wave’s Versatile Air-Launched Platform would presumably be air-launched and draw fire from anti-aircraft weapons away from their mother platform. Alternatively, the unmanned drone would be used to distract or spoof enemy air defense radar into thinking that a much larger force was inbound.

The U.S. Air Force is interested in acquiring a transformative piece of new propulsion technology to power decoy drones through the air. The new engine type is being developed by Wave Engine Corp., a company that the Air Force recently awarded $1 million to further develop the engine mated to the company’s proprietary Versatile Air-Launched Platform.

Artwork released by Wave shows several different kinds of small aircraft powered by a pulse jet engine mounted to the top of the fuselage. They’re very intriguing. Wave explained that their engines

also known as ‘pulsejet’ engines, are a class of aircraft engines that operate using pressure waves instead of rotating machinery. These engines are characterized by extreme simplicity; they are essentially hollow tubes with no moving parts inside. Intermittent combustion inside the tubes produces pressure waves that push hot gases and produce thrust.

Though Wave’s engines are indeed innovative, they’re not the first company to build and test pulsejet-type engines: the technology actually has its roots in World War II, used by Nazi Germany to propel its terrifying V-1 and V-2 rockets toward targets in Britain. A fascinating account of Nazi Germany’s rocket program can be seen and read here.

“The propulsion technology provides jet performance and full authority digital electronic control in a highly cost-effective powerplant that requires no moving parts,” according to company material. “Wave Engine Corp’s technology enables an order-of-magnitude reduction in the cost and complexity of jet propulsion, making it practical for a wide variety of aviation platforms for which jet propulsion was previously cost-prohibitive.”

Wave’s Versatile Air-Launched Platform would presumably be air-launched and draw fire from anti-aircraft weapons away from their mother platform. Alternatively, the unmanned drone would be used to distract or spoof enemy air defense radar into thinking that a much larger force was inbound.

Nazi Germany’s V-1 and V-2 rockets were used to mixed effect during World War II and were in essence some of the world’s first cruise missiles. Although they did benefit from significantly less moving parts than aircraft engines, the missiles, known as “doodlebugs” or “buzz bombs” produced less thrust, and were incredibly loud.

“The future of aircraft is smaller, more capable and more affordable. The aviation industry has long been stymied by the lack of high-performance engines for small aircraft, and we are here to break through this barrier,” stated the CEO of Wave Engine Corporation, Daanish Maqbool. “We’re proud to receive this highly competitive award from the USAF to bring forth this propulsion technology and help define the aviation landscape of the future.”