Will the Army's Latest Sig Sauer Gun Make a Difference on the Battlefield? 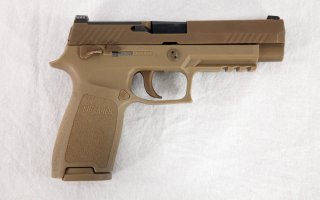 Here's What You Need to Know: The M17 and M18 pistols are manufactured by Sig Sauer, who earned the $580 million contract to produce the weapons in January 2018.

(This article first appeared in April 2018.)

“You can close with the enemy in close-quarter combat and engage the enemy with one hand. It is tough to do this with the M9,” Lt. Col. Martin O’Donnell, spokesman for the 101st Airborne, told reporters a few months ago.

This article first appeared on WarriorMaven in April 2018.