Will a Coronavirus-Related Cease Fire Pause the Yemeni Civil War? 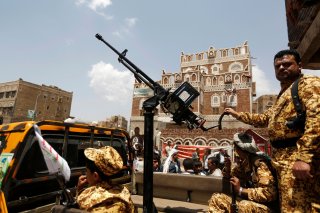 The Saudi-led coalition in Yemen announced that a two-week cease-fire in the anti-Houthi Yemen conflict would begin on April 9. Riyadh also announced that they would be giving $500 million in aid to assist the U.N. humanitarian response in Yemen, and also clarified that the two-week cease-fire could be extended. Both Emirati and U.N. officials celebrated the announcement, though Houthi officials have yet to give an official response.

The worsening COVID-19 pandemic in both Saudi Arabia and Yemen is driving both countries to want to preserve their military resources. For Saudi Arabia, de-escalating operations in the war-torn country would also allow it to focus on other burning fires at home, including its shaky Vision 2030 economic trajectory and the recent breakdown of OPEC+ cooperation. Saudi Arabia also no doubt wants to ward off intensifying international scrutiny over the Yemeni conflict’s humanitarian toll.

A sustained cease-fire, however, will ultimately rely on the buy-in of Houthi rebels, who have continued to display their military might in the face of a gradually reduced coalition effort in Yemen. Indeed, Houthis launched ballistic missiles at residential neighborhoods in the coalition-held city of Marib mere hours before Saudi Arabia announced the agreement.

The success of the newly inked cease-fire will thus depend largely on the actions of Houthi rebels in the coming days. The Houthis are positioned to demand political concessions in the next round of negotiations. And for this reason, they might choose to continue attacking the Saudi-led coalition forces to ensure they maintain that political leverage, especially as they perceive a reduced desire for Riyadh’s continued engagement inside Yemen.

Southern separatists are also fighting alongside the Saudi coalition and the Yemeni government against the Houthi rebels. But they, too, ultimately have their own secessionist interests and are well-positioned to demand more out of the next round of negotiations as well. The approaching Muslim holiday of Ramadan could offer a natural segue to a longer period of relative peace, though only if all the warring factions in Yemen deem it advantageous.

Saudi Arabia Attempts Another Cease-fire in Yemen is republished with the permission of Stratfor Worldview, a geopolitical intelligence and advisory firm.