Will Israel Turn Its F-35s Into Electronic Warfare Machines? 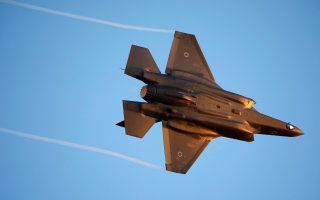 Here's What You Need to Know: Having a sizable and fast-growing fleet of F-35s brings new options to Israel’s ability to project power.

The Israeli Air Force is expected to have as many as twenty-seven F-35s by November of this year, bringing upgraded electronic warfare technology and new dimensions of aerial combat power to the Middle Eastern country facing threats from nearby hostile countries in the region, such as Iran.

As recently as July 4th of this year, Israel received four new F-35s, including a special test-aircraft slated to receive specific high-tech electronic warfare (EW) upgrades, according to a report in Breaking Defense. The report says Israeli engineers are planning to upgrade the already quite advanced ELINT EW system.

Specifics regarding EW technologies, particularly with the U.S. F-35, are often unavailable due to security reasons, yet there are a few interesting aspects in which EW could substantially contribute to the aircraft’s combat power. Not only can it emit electronic signals to, for instance, jam targeting systems guiding incoming enemy missiles, but it can also perform critical defensive functions.

For instance, an advanced EW system on the F-35 can likely contribute to the aircraft’s Mission Data Files threat data library. In other words, it could detect the electronic signature of approaching enemy aircraft or even ground-based air defenses and alert the aircraft’s sensor targeting and surveillance systems. The F-35’s Mission Data Files includes profiles of known enemy threats, such as specific sensor or electronic data related to particular enemy threats likely to emerge in certain geographical areas.

The F-35s sensors, including cameras, infrared targeting systems or on-board Active Electronically Scanned Array radar, can detect the existence and trajectory of enemy targets and bounce the information off of a the Mission Data Files to inform pilots regarding the specifics of the threat. EW can function as a fundamental part of this equation, thus shedding further light upon why Israel is likely to seek EW upgrades for its fleet of F-35. Advanced EW could, for example, potentially help detect and “jam” or disable Iranian air defenses.

Moreover, the range and fidelity of on-board sensors can give the F-35 new dimensions of targeting and surveillance technology. The aircraft’s Distributed Aperture System, which includes a 360-degree display of surrounding cameras, can find threats at great distances. In addition, the DAS system is networked with the F-35s Electro-Optical Targeting system. That Electro-Optical Targeting system is a high-fidelity, long-range sensor intended to find enemy targets before the F-35 itself can be seen by any enemies.  Merging this sensor system with advanced EW is a likely focus of Israel’s F-35s upgrades.

So far, the Israeli Air Force operates twenty F-35s, the report says. Having a sizable and fast-growing fleet of F-35s brings new options to Israel’s ability to project power and conduct reconnaissance missions.