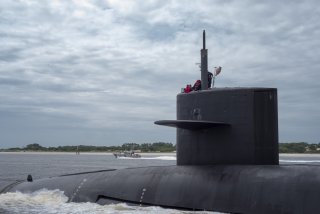 Here's What You Need to Remember: There have been, and continue to be, significant debates in Congress and among some at the Pentagon as to whether the introduction of new low-yield nuclear weapons could “lower the threshold” to the use of nuclear weapons and foster a mindset among some that some kind of limited nuclear exchange might be a viable option.

Several prominent members of Congress are raising alarm about reports that the Secretary of the Navy may cancel the nascent Nuclear Sea Launched Cruise Missile (SLCM) program called for in the Trump Administration’s 2018 Nuclear Posture Review (NPR).

“Reports that an Acting Secretary of the Navy would cancel a new Nuclear Sea Launched Cruise Missile after submission of the FY22 budget, and before a Nuclear Posture Review has been started — much less completed — is bewildering and short-sighted,” Rep. Mike Rogers (R-AL) and Sen. Jim Inhofe (R-OK) said in a joint statement from the House Armed Services Committee.

The prospect that such a program might be canceled arguably represents the very heart of growing debates about nuclear weapons modernization. A nuclear-armed sea-launched cruise missile would introduce lower-yield nuclear options for commanders, something proponents argue is a needed deterrent against Russia, a country that already operates tactical nuclear weapons.

There have been, and continue to be, significant debates in Congress and among some at the Pentagon as to whether the introduction of new low-yield nuclear weapons could “lower the threshold” to the use of nuclear weapons and foster a mindset among some that some kind of limited nuclear exchange might be a viable option. There are two distinct schools of thought on this, one of which simply maintains that the use of any nuclear weapon, in any capacity, should be treated as a large-scale, precedent-setting nuclear attack, prompting a massive retaliatory strike.

Another point of view, conversely, maintains that operating with an ability to mount a proportional “low yield” or tactical nuclear response to a limited attack might work as an additional and much-needed deterrent. This ladder position is one that was taken by former Sec. of Defense James Mattis who told Congress following the 2018 NPR that the intent of adding low-yield weapons to the arsenal would be to bring Russia back to the negotiating table following their violations of the INF Treaty.

Part of the growing concern likely resonating with those in favor of continuing the SLCM is the well-known and highly concerning pace of Russian and Chinese nuclear weapons modernization. Multiple Pentagon reports cite that China may indeed double its arsenal of nuclear weapons within just the next five years, a staggering pace of expansion.

Vice Adm. Johnny Wolfe, Director of the U.S. Navy’s Strategic Systems argues the opposite, saying that nuclear cruise missiles would conversely greatly strengthen deterrence. Wolfe further elaborated upon this thinking by referring to Russia’s well-known “escalate to de-escalate” posture, saying Russia’s use of this kind of approach would be to threaten the use of a tactical nuclear weapon to “back us down.”

“If you have a sea-launched nuclear cruise missile, it can change an enemy’s thought process. If they escalate but know we have something in kind, they have to ask themselves ‘do we really want to do that’? This puts the threshold right where it needs to be so nobody thinks using nuclear weapons can provide any advantage,” Wolfe told The Mitchell Institute for Aerospace Studies in a video interview earlier this year.