Will Vietnam Step Up and Challenge China In the South China Sea? 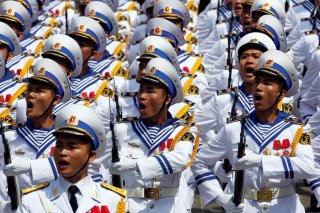 On 14 April, as China’s Haiyang Dizhi 8 survey group sailed into the South China Sea again, Taiwan scrambled ships to monitor the passage of the Chinese navy’s Liaoning aircraft carrier strike group as it went through the Miyako Strait near Okinawa and turned south.

According to a MarineTraffic report on 23 April, the carrier group was operating near Macclesfield Bank, and the survey group was shadowing a Philippines-flagged drilling ship that had been contracted by Malaysia to survey for oil in its exclusive economic zone near the overlapping waters between Malaysia and Vietnam.

This is the third time in recent years that China’s naval activities have threatened a maritime crisis for Vietnam. In May 2014, the Haiyang Dizhi 981 oil rig was parked in Vietnam’s EEZ, and from July to October 2019 the Haiyang Dizhi 8, escorted by armed coastguard vessels, surveyed extensively near the Vanguard Bank, resulting in a month-long standoff with Vietnam.

Now, the Haiyang Dizhi 8 and its escorts appear to be pressuring Malaysia’s new government as they did with Vietnam. While this new standoff was over by 25 April, China’s bullying in the South China Sea won’t stop there, at least for Malaysia, Vietnam, and Indonesia.

This manoeuvring has come at a time when the Covid-19 crisis has disrupted US ship deployments. At least two US aircraft carriers have had rotations delayed, upsetting the balance of forces between the US and China in this region in China’s favour.

On 22 April, the US Indo-Pacific Command confirmed that the cruiser USS Bunker Hill, amphibious assault ship USS America, destroyer USS Barry and Australian frigate HMAS Parramatta conducted an exercise in the same region. In the event of a clash, the US and Australian ships would have been outnumbered by People’s Liberation Army Navy vessels.

The Covid-19 crisis is contributing to the erosion of US air and naval dominance in the region and has driven China to take new and bolder actions. In these circumstances, Vietnam and ASEAN need to rethink the institutional basis of ASEAN and consider how it can better protect the security of each country and the ASEAN community.

Compared with other ASEAN countries, Vietnam is in a key strategic position and has taken a tougher stance on the South China Sea. In 2020, it has new roles to play as ASEAN chair and as a non-permanent member of the UN Security Council. China is aware that the harder it pushes Vietnam, the closer Hanoi will move towards the US.

But China also believes that if it can intimidate Vietnam, it might be able to manipulate ASEAN and keep the US out of the South China Sea.

On 30 March, Vietnam handed a note to the UN secretary-general detailing its sovereignty over the Hoang Sa (Paracel) and Truong Sa (Spratly) islands and rejecting China’s arguments on the South China Sea. On 17 April, China sent its own note to the UN as part of its ‘three warfare doctrine’—applying psychology, communication and law.

There’s concern that China may seek to exploit the global uncertainty and try to take Vietnam’s vulnerable offshore resources near Vanguard Bank or park an oil rig or a structure on Whitsun Reef. China may even declare an ‘air defense identification zone’ in part of the South China Sea.

To thwart China’s ambitions and to fill the strategic vacuum being left by the US, Southeast Asia needs a new regional security architecture. That could take the form of an stronger ‘Quad-plus’ arrangement, in which the US, Japan, India and Australia work more closely on regional security cooperation with New Zealand, South Korea, Vietnam and possibly Indonesia and Malaysia. Such a grouping also could enable Japan to play a stronger security role in the South China Sea.

Former US national security adviser H.R. McMaster recently wrote that China’s ambition is fuelled by insecurity and that its outward confidence covers an inner fear. He identified three prongs of Chinese strategy: ‘co-option, coercion, and concealment’ and, in an apparent dig at current US policy, argued that America’s ‘strategic narcissism’ should be replaced by ‘strategic empathy’ with regional partners.

The pandemic provides good reason to further reform ASEAN. It has been suggested that Vietnam’s ASEAN chairmanship should be extended into 2021 to make up for the time lost to dealing with the pandemic. If that happens, Hanoi could focus on strengthening ASEAN to face the growing strategic challenges in a post-pandemic world.

For example, the ‘ASEAN consensus’—the requirement that decisions must be supported by all 10 to be binding—should be replaced with a requirement for a two-thirds majority. The ‘non-interference’ principle, under which member nations reject outside intervention, should be qualified to allow exceptions to ensure regional security. ASEAN should also take steps to  identify itself with the new Indo-Pacific vision to ensure national and regional security, and the new code of conduct for the South China Sea should be based on the UN Convention on the Law of the Sea.

The harder China pushes ASEAN countries, the faster it will drive them to greater unity to defend their sovereignty and vital interests.

China wants to divide the ASEAN nations like scattered chopsticks so that it can break them one by one. It wants only bilateral, not multilateral, negotiations to keep the US and the West out of the region. If China controls the South China Sea, ASEAN will face Balkanisation, with its members vassal states to China.

ASEAN countries should put aside their maritime disputes to build a new ASEAN consensus.

Vietnam should pursue national and regional institutional renovation and shift away from its ideological crossroads, where it’s caught between the US and China, to achieve sustainable economic growth and greater strategic resilience.

As Vietnam tries to be less dependent on China on many fronts, it should defend its sovereignty and vital interests in the South China Sea. It should bring the South China Sea disputes to UN forums and the Permanent Court of Arbitration.

Vietnam and ASEAN, with other partners that share a vision for regional security and stability, should build deterrent capabilities based on their own strengths, international cooperation and their willingness to fight.

Now, as the pandemic brings both calamity and impetus for change, Vietnam should not lose the third opportunity that this new turning point offers.

This article by Nguyen Quang Dy first appeared in The Strategist on May 13, 2020.