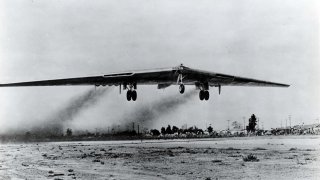 Here's What You Need To Remember: A flying wing reduces drag, making it a useful design for long-range bombing and transport.