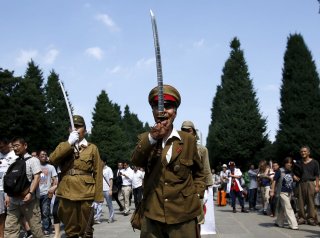 Key Point: Tokyo did arm its soldiers with swords and many of those were seized by Americans during the war. But they were a different kind of weapon.

It is a scene from World War II movies and comic books; seeming fanatical Japanese soldiers charging out of the jungle wielding a "samurai" sword, swinging widely and yelling "banzai." It isn't actually Hollywood or comic book fiction, however.

The "banzai" war cry began as a generic cheer uttered by soldiers and civilians alike, as the word literally means "ten thousand years." It had long been used in Japan to indicate joy or a wish for long life and during the war was used in celebration. Often the soldiers yelled "Tenno Heika Banzai," which roughly translated to "long live the Emperor." The war cry took up new meaning as the tide turned against the Japanese forces, which made the so-called "banzai charges" – the last-ditch attacks, which may have almost seemed futile in retrospect.

And during those charges, it was common for an NCO or officer to draw his curved sword and lead the attack. While thousands of these swords were certainly captured in the field, untold thousands more were surrendered to the Allies at the end of the war and given to U.S. and other Allied soldiers, including those who had been prisoners of the Japanese. The Japanese swords were among the most common "war trophy" from the Pacific campaigns of the Second World War, and even today these are misidentified as "samurai swords."

The swords may have the appearance, as well as many of the features, as the famed katana swords that were carried by the samurai, but apart from some few "ancestral blades" that were refitted with new hardware, the swords were in no way linked to the samurai class of earlier historic periods of Japan. The samurai, which had been part of the powerful military caste in Japan for centuries, rose to power in the 12th century. However, the Meiji Restoration of 1868 led to the abolition of the feudal system. While they were relieved of their traditional privileges, many samurai did enter the elite ranks of politics and industry in Japan.

In the 1930s as Japan became more nationalist and more imperialist the bushido – "the way of the warrior" – was revived and Japan's military moved away from European style sabers for ceremony to a sword that resembled the samurai katana.

The Imperial Japanese Army's "shin gunton" – meaning new pattern – replaced the western style "kyu gunto." The quality of the blades varied greatly. Some reused old blades, and this was common of higher-ranked officers whose ancestors may have been members of the samurai class, while some officers of means (who weren't of the old guard) opted for hand-made swords that were made by such famous smiths as the Yasukuni Shrine, the Gassan School and Ichihara Nagamitsu among others.

For the vast majority of officers and almost all NCOs the blades were machine-made and produced before the war in Germany and even in the UK. While officer's swords typically featured a traditional rayskin and a wooden base with a cloth wrapping, the NCO swords' handles were cast brass or aluminum. As the war progressed the quality of the swords suffered. The late war swords featured simpler mounts and nearly all were machine-made. Even the officer's handles featured simple wooden hilts.

While most of the swords lacked the craftsmanship of the earlier katanas, the swords still proved quite deadly. In 1937 during Japan's campaign in China, two officers – Tsuyoshi Noda and Toshiaki Mukai – reportedly took part in a gruesome contest to see who could kill 100 enemy soldiers with their swords. It has been questioned if such a contest took part, but both men were tried and executed as war criminals.

After the war, Japanese soldiers were required to surrender all arms, which included swords. There were many special ceremonies where the swords were surrendered and these were held in Japan as well as in many previously occupied areas. It has been reported that many of the soldiers who had taken their family blades to war would eventually have the swords returned. Over the years this has created some controversy as those blades were considered family heirlooms and have become especially valuable. The debate as to whether those should have been consider legitimate war trophies or priceless art objects continues to this day.