The World War II M1 Carbine Was Ahead of its Time 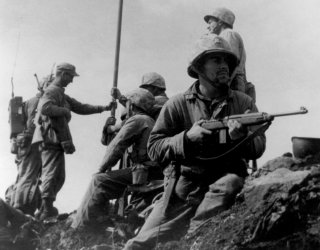 Key Point: The M1 Carbine was accurate and effective out to 300 yards and much easier to handle in close quarters combat than the big and heavy recoiling M1 Garand.

World War 2 was a fascinating time for weapon development. We saw the birth of the general-purpose machine gun, the adoption of an autoloading rifle, and even the development and mass fielding of automatic rifles. During this terrible war, we also developed the M1 Carbine, which would go on to become legendary in both performance and concept.

Breaking Down the M1 Carbine

The M1 Carbine was a short and light semi-automatic rifle firing the .30 Carbine cartridge. The design fed from a box magazine that held 15 rounds. Most of the time, the term carbine applies to a shorter variant of a standard rifle. However, the M1 Carbine was its own design and not a smaller variant of any other platform.

The M1 Carbine utilizes a short-stroke gas piston system designed by David Marshall ‘Carbine’ Williams, who started designing guns while serving a prison term for murder. Winchester developed the rifle and cartridge, and the U.S. Army adopted it in October of 1941.

The M1 Carbine was an oddball weapon for the United States to develop. The main battle rifle for the U.S. at the time was the M1 Garand, a weapon that fired the powerful .30-06 cartridge. Alongside it served the pistol caliber Thompson submachine gun and the Browning Automatic rifle. Somewhere in the middle of these weapons sat the M1 carbine, with its famed .30 carbine cartridge.

It was not quite a battle rifle cartridge and not quite a pistol cartridge, but rather somewhere in between the two. It offered more range and velocity than the Thomspon or M3 but couldn’t keep up with the range and power of the famed M1 Garand. Why exactly would the Army want such a weapon?

Its purpose was to replace the M1 Garand for all non-combat troops. The M1 Garand weighed 9.5 pounds and was 43.5 inches long. It’s was a hassle for artillerymen, truck drivers, armored troops, and mortarmen to deal with. The M1 Carbine offered a smaller, lighter rifle with more combat potential than a 1911. It was 35.6 inches long and weighed only 5.8 pounds loaded.

Thompsons were too expensive and hard to come by to equip noncombat troops with them, and the M1 Carbine offered a $45 dollar solution to the problem. Plus, M1 Garands were already in short supply at the beginning of the war, and the nation’s infantrymen needed the extra range and power the M1 Garand offered.

Upon entering service, the M1 Carbine became an instant favorite among troops. Troops love cutting weight, and a light and handy rifle is always appreciated. Warfare in World War II was different than any other war, and in comparison to previous conflicts, it moved at a lightning pace. While the .30-06 could reach out well beyond 500 yards, engagements were often within 300 yards or closer.

The M1 Carbine was accurate and effective out to 300 yards and much easier to handle in close quarters combat than the big and heavy recoiling M1 Garand. It offered a longer effective range than the Thompson, and by falling into its own little niche, it proved to be an effective option for combat use.

Why It Was Revolutionary

The M1 Carbine was revolutionary in three different ways.

While it can’t claim the title of the world’s first assault rifle, it does get quite close. It lacked selective fire capability until the M2 Carbine was invented. The cartridge it fired wouldn’t be considered intermediate by today’s standards, but at the time, it’s hard to classify it as anything but intermediate when compared to the .45 ACP and .30-06.

As we’ve discussed, most warfare fought at the time didn’t take full advantage of the massive, hard-hitting .30-06. The lighter, faster firing .30 Carbine round proved quite capable for combat in World War II. And as time progressed, rifle designs would pull from this lesson, constantly get shorter and lighter. From the M14 to the M16, and later M4 Carbines, and MK18s as well as guns like the LVAW, smaller and lighter have become integral elements of modern weapon design. It’s important to remember that it was the Little M1 Carbine that proved the concept successful.

Finally, the M1 Carbine can be considered the world’s first Personal defense weapon, even if the PDW concept didn’t become official until the 1990s. NATO wanted a lighter, shorter weapon that was more capable than an SMG or a pistol. The M1 Carbine actually managed to fit that bill nearly 50 years before the term for the concept was invented.

These days most rifles on the battlefields are considered carbines of one type or another. Rifles have gotten lighter and shorter because modern tactics and warfighting technology allow them to. That all started in World War II and the M1 Carbine. It’s easily one of the most influential weapons in American military history, and it wasn’t even trying to be.

This article first appeared on Sandboxx and is being republished due to reader interest.