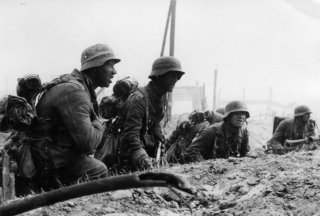 Here's What You Need to Remember: The end of the War in the East left the Soviet Union in control of a vast portion of the Eurasian continent. Red Army forces occupied Germany, Poland, Czechosolvakia, parts of the Balkans, the Baltic states, and parts of Finland. The Western allies remained in control of Greece and much of western Germany, while Joseph Tito established an independent communist regime in Yugoslavia.

Robert Farley is a frequent contributor to TNI, is author of The Battleship Book. He serves as an Senior Lecturer at the Patterson School of Diplomacy and International Commerce at the University of Kentucky. His work includes military doctrine, national security, and maritime affairs. He blogs atLawyers, Guns and Money and Information Dissemination and The Diplomat. This article first appeared several years ago.