World War III May Be Closer Than You Think 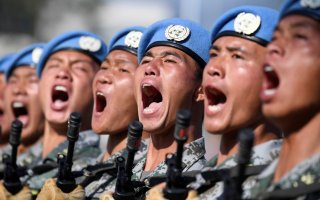 Key Point: It is only a matter of time before the situation between the U.S., Russia, China and Iran becomes too tense, and the fighting begins.

Since the 1970s, the United States has had an All-Volunteer Force (AVF). From the beginning of the United States until the end of the Vietnam War, the country had always conscripted eligible male members of its population to fight—and win—the nation’s wars. Yet, the American experience in Vietnam broke the national consensus on the draft. Since then, policymakers have struggled to square public ambivalence about foreign intervention with what they’ve viewed as preserving the national interest.

Nixon was not alone in his support for an AVF. Many military leaders who had fought in Vietnam supported it, realizing that those who volunteered to serve and fight in a war were usually more effective in combat than those who were simply drafted into service. Despite the strategic failures of the AVF in Afghanistan and Iraq, most military leaders today insist upon preserving the AVF rather than institute conscription. The brilliant economist, Milton Friedman, hailed the creation of an AVF as a momentous step toward national progress. Friedman argued that a conscription force was ultimately one in which its members were slaves until the conflict ends (or they die). On the other hand, Friedman believed that an AVF was a military in which its members had their freedom preserved. The AVF has also fostered a degree of technological innovation that helped to keep the U.S. force smaller than it ordinarily would be—freeing up more Americans to, theoretically, become net contributors to America’s economic miracle. When the draft existed, it was created because warfare was a truly national endeavor. Today, we are told, wars are fought by small teams of elite professionals—like the Medieval knights of old. Should a great power conflict erupt, though, the age of specialization in warfare will go away, and total warfare will again be upon us again.

The All-Volunteer Force is Insufficient

Currently, the U.S. defense budget is 4.2 percent of America’s overall GDP. While the defense budget in the United States is considerably higher than the defense budgets of its major rivals, it is at historic lows (it reached 15 percent of U.S. GDP during the Korean War). More importantly, less than one percent of the American population (1.29 million Americans) serves in the military. Further, in 2016, nearly one-in-five military deaths in Afghanistan were of private military contractors.

Not only have private contractors augmented the U.S. AVF, but so too has technology. What the Chinese routinely refer to as “American Magic” has become a force multiplier for that relatively small, expeditionary AVF. Satellites, airpower, cyber combat, drones, and a coterie of other technical assets have allowed for the relatively small U.S. military to punch above its weight. Yet, the U.S. military and its leaders have come to fetishize high-technology and rely far too much on it to make up for real weaknesses in its overall force structure. The wünderwaffe will not save U.S. forces when a world war starts. U.S. Policymakers today tend to forget that wars are still fought and won by men, not machines. American rivals have not forgotten this timeless truth.

What few understand is that the AVF arose at a time when great interstate conflict was not a serious possibility. The enemies that the United States military fought against were usually insurgent-type forces engaged in various wars of liberation. Even during the Cold War, the Soviet Union’s direct threat to the United States was predominantly ideological, technological, and covert. Back then, the threat of an actual conflict erupting between the two superpowers was relatively low.

Today, however, the chances for great state conflict are high. As the threat of interstate warfare increases, America’s small expeditionary force (which is wearing thin from decades of constant deployments) will be insufficient to meet the challenges that rival great powers, such as China or Russia, pose to the U.S. military. This is especially true, considering the focus of America’s enemies on depriving U.S. forces of their aforementioned technological advantages.

As I detail in the opening chapter of my forthcoming book, Winning Space: How America Remains a Superpower, which will be released in 2020 by the Republic Book Publishers, the first shots of another world war will be fired in space against America’s satellite constellations. From there, cyber and information warfare techniques will be used to sow chaos and degrade America’s resistance quotient—before U.S. military forces can even respond to an attack by either Russia or China. Once U.S. forces deploy, with their technological abilities stunted, they will then have to penetrate intense anti-access/area denial (A2/AD) bubbles where U.S. warplanes and transports will likely suffer high attrition rates if they move in too close.

This is where technologists will assert hypersonic weapons will be key. But, suppose the United States does not have a robust enough arsenal of hypersonic vehicles, how long does Washington wait for enough of those units to be built in order to retaliate against those who attack American forces? And, what happens during that interregnum? Or, how will these weapons systems operate effectively in a degraded environment where GPS signals were being jammed? Meanwhile, the loss of America’s satellites will ensure that U.S. forces responsible for defending either Europe or rolling back a Chinese invasion of Taiwan will be too small, disoriented, and isolated away from America’s power base to effectively resist either a Russian invasion of Eastern Europe or a Chinese invasion of Taiwan.

The AVF model will simply be insufficient to supply the military with the force levels that will be required to go up against China’s 2.18 million-man military or Russia's more than one million-man force. American troops will also have to learn to fight in a pre-1970s manner, where smart bombs will be dumber; quantity will be more preferable to quality; America’s global logistical supply chain will not be secured, and any war will be as bloody as either of the world wars. It will also be a time when not even the American homeland will be spared from the devastation and chaos of a great power war (nor would the homelands of either China or Russia).

The United States does not have the industrial capacity to surge the construction of weapons and materiel needed to outlast and defeat its rivals in either China or Russia. Already, U.S. shipyards are having trouble meeting the increased demand for output in terms of building the Navy’s new Virginia-class submarines. These industrial flops are occurring all over America’s domestic supply chain. America’s latent industrial capabilities proved to be a decisive advantage over its foes in both world wars. This is a capability that America lacks today—and it will take much time and effort to rehabilitate (if it happens at all). American rivals will not wait around for the United States to reconstitute those lost capabilities. Meanwhile, countries, notably China, do possess such industrial capabilities today. Thus far, U.S. industrial policy, despite the enactment of a trade war against China, and demands to “reshore” U.S. manufacturing abilities from abroad, has been mostly unchanged.

One thing is certain, though, when another great power war erupts, it will not be relegated to being fought between two, well-trained forces of professionals on distant battlefields. Nor would the fighting be quick, short, and sharp. It will be waged along the lines of previous great wars wherein great powers possessed of relatively equal capabilities leveled each other. Mark Cancian believes that “after about nine months of intense peer conflict, attrition would grind the U.S. armed forces down to something resembling the military of a regional power." That is unless the United States can embrace a total warfare ethos—as it did in the world wars.

Such a total war, mind you, will devastate the world order. Premodern tribalism will quickly replace postmodern enlightenment—especially as the technological trappings of modernity were stripped away. The exchange of nuclear, not to mention biological and chemical, weapons will be a high probability as the combatants looked for leverage over one another, just as the Germans and Allies did with chemical weapons in the First World War, the longer that war ground on. This would especially be the case after early-warning missile satellites were knocked out in the opening phases of a space war. Being blind in the nuclear age is rarely good.

Victory in a new world war would be Pyrrhic. What’s more, revolutionary politics in the countries of each combatant will likely become the norm, forever changing those societies, just as politics during the interwar years became radicalized. Remember: the rise of communism in Russia and fascism in the Axis Powers occurred in responses to the devastation of the First World War and the inevitable Great Depression that followed.

U.S. policymakers should start planning now for the inevitable need to reconstitute the draft and should start anticipating how best to prepare for the demands placed upon its future force—and the country overall—in the event of another world war. When God told Noah to build the ark, he did not wait until the rain began. Similarly, U.S. policymakers have a moral duty to better prepare the country for the coming storm right now. A lack of planning will ensure the worst possible scenario befalls the United States when a great power war begins.