This is the World's Most Powerful Battleship—And the U.S. Navy Said No 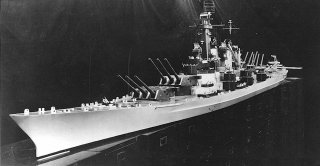 Here's What You Need To Remember: The Navy's decision to punt on the Montana-class will disappoint battleship lovers forever. Fortunately, it probably shortened the war and saved many lives.

The U.S. Navy’s most powerful battleships were never actually built.

In the late 1930s, the U.S. government, recognizing the deteriorating world situation, sought to rebuild U.S. naval power. The crash of the stock market in October 1939, as well as the Washington and London naval treaties, had slowed the growth of the U.S. Navy and reduced its tempo of peacetime operations. By 1940, however, with fighting raging in Asia and Europe, it was clear the United States needed to beef up its defensive capability to deter attack—or to prosecute a war if it were dragged into conflict.

The Montanas—Montana, Ohio, Maine, New Hampshire, and Louisiana—would be slower than the Iowas but much more heavily armed and armored. One of the first designs of the class—which never made it off paper—was for an 860-foot-long warship with a displacement of 52,000 tons with a trial displacement of 64,500 tons. The ships, would have been armed with twelve 16”/50 caliber guns, giving them twenty-five percent more firepower in the main battery. The twelve guns would have been installed in four three-gun turrets, two forward and two aft, to the Iowa classes’ two forward and one aft. Secondary armament would consist of twenty 5-inch/38 caliber dual-purpose guns capable of anti-ship, amphibious landing support, and anti-air defense.

By March 1940, Navy ship architects floated a new, even bigger design: a battleship 1,050 feet long, with a waterline beam of 120 feet. The ship would have a standard displacement of 70,000 tons and a trial displacement of 80,000 tons. The main battery would have stayed the same, but the secondary battery would feature twenty 5-inch/54 caliber guns. The longer barrel length on the new 5-inch guns resulted in a higher velocity and longer range, thus increasing the size of the battleship’s protective bubble against aircraft.

Officially, the U.S. Navy states the Montanas would have been a compromise between the two designs, though on the high end. The Navy’s statistics for the ships include a length of 921 feet, a beam of 121 feet, and the same armament of twelve 16”/50 guns and twenty 5-inch/54 caliber guns. Top speed would have been the same as previous ships, maxing out at 28 knots. The Navy states that the third design featured improved armor against shellfire and torpedo attacks over previous battleships and “would have been the only new World War II era U.S. battleships to be adequately armored against guns of the same power as their own.”

The Montana class battleships would have served on the U.S. Navy’s battleship line, prepared to duke it out with the opposing navy’s own fleet of battleships in a decisive battle. Unfortunately for the battleship community, the reign of the battlewagon was already coming to an end. The attack on Pearl Harbor on December 7th, 1941, and the destruction of the Royal Navy’s Force Z on December 10th, 1941 made it painfully clear that aircraft—including aircraft carriers—had eclipsed battleships as the primary weapon at sea. The sinking of the battleship HMS Prince of Wales and battlecruiser HMS Repulse—for the loss of only three Japanese aircraft—demonstrated how much large surface ships were at the mercy of airpower.

The Montana battleships were initially delayed to prioritize new aircraft carrier construction, then canceled outright in 1943. The U.S. Navy would not build a ship as large as the proposed Montanas until 1955 when the supercarrier USS Forrestal entered service. Like Montana, Forrestal was approximately 900 feet long and had displaced 80,000 tons fully loaded. Unlike Montana however, it could pack up to eighty-five aircraft of various types on its flight deck and hangar, giving it a much greater striking range, flexibility in adapting to various missions, and the ability to rapidly replace lost combat power by simply adding more aircraft.

The U.S. Navy never built more battleships after the Iowa class, let alone larger ones. The Montana-class battleships were obsolete before the steel was cut for them—tragic for battleship fans but proof that the Navy was heeding trends and choosing to spend resources wisely during a turbulent and stressful time. Had the Navy stubbornly pushed ahead and built the Montanas a lack of carriers could have extended the length of the war and cost even more lives. Ironically, had the Montanas been built, we might look back on the battleship era with considerably less pride and nostalgia than we do today.

Kyle Mizokami is a writer based in San Francisco who has appeared in The Diplomat, Foreign Policy, War is Boring and The Daily Beast. In 2009 he co-founded the defense and security blog Japan Security Watch. This article first appeared in 2018.