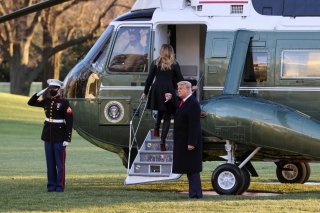 What would happen if a president actually tried these things? The answer, at least in the America we live in today, is that he would fail.

In a recent article, Bonnie Kristian at The Week quotes me at length on these questions. Martial law, I noted, involves a wholesale suspension of civil liberties, so “military commanders can issue orders to civilians” as well as “arrest and mete out punishment based on tactical needs of war rather than the civilian law on the books.” The only time it has been tried on a national scale was when Abraham Lincoln suspended habeas corpus rights during the Civil War to silence dissenters.

But in Ex parte Milligan (1866), the Supreme Court ruled Lincoln had overstepped his legitimate bounds. This ruling is “key” to understanding the president’s martial law powers today, Olson said. It means “the president cannot simply declare martial law at his whim. There must be a state of invasion or insurrection such that ground is actually contested, and resort to conventional civil courts and authority must have collapsed.” Absent those conditions, the court said in Milligan, martial law is “a gross usurpation of power,” and in fact “can never exist where the courts are open.”

The courts are open now, which means any declaration of martial law — including in the six states Flynn targeted — would be illegal. “Courts would not be afraid to recognize this as reason to strike down acts pretending to martial law authority,” Olson said, just as they haven’t been afraid to smack down specious election challenges. That might not stop Trump, Olson allowed, but it would stop many of the people he’d need to execute this plan. And even if their constitutional oaths did not constrain them, there would be “very real personal consequences for both civilian and military administrators should they go along” with such an unlawful proposal, Olson noted, as career bureaucrats and officers undoubtedly realize. (The Army statement is an indicator of this very understanding.)

Martial law has been ordered in some dozens of other instances, typically of brief and localized effect, as in quelling riots. Following the attack on Pearl Harbor, federal officials placed the territory of Hawaii under martial law through much of the war, but the Supreme Court in the 1946 case of Duncan v. Kahanamoku struck down the authority of military tribunals over civilians, ruling that even the very real perils arising from World War Two did not deprive Americans of the protections of the Constitution. “Our system of government is the antithesis of total military rule, and its founders are not likely to have contemplated complete military dominance within the limits of a territory made a part of this country and not recently taken from an enemy.”

The Insurrection Act gives Trump no additional leeway here. It does provide an exception to the general prohibition (under the Posse Comitatus Act) on using federal troops to enforce domestic law. But those exceptions — which typically involve violent insurrection — aren’t applicable in this scenario. Furthermore, Olson told me, “there is a separate set of laws in which Congress has not only disallowed, but even chosen to make a crime, actions by federal troops or officers that interfere with the right to vote.”

The “thing to remember about the Insurrection Act,” Olson added, “is that it doesn’t allow federal troops to enforce anything but already‐​prevailing federal, state, and local law. It does not authorize martial law in the sense of deprivation of ordinary civil liberties, special tribunals, irregular punishment, street justice, cutting off resort to the courts, etc.” (In 2006, the annual National Defense Authorization Act included a provision which changed that, allowing the president to impose martial law via the Insurrection Act. Uproar was widespread, however, and in early 2008, Congress repealed the change.) So even if the Insurrection Act were applicable (which it isn’t), and even if there weren’t additional legal protections against federal military meddling in state‐​administrated elections (which there are), deploying troops under this authority still wouldn’t result in martial law.

Both Ex Parte Milligan and Duncan v. Kahanamoku are full of the sort of ringing language about liberty that should inspire every patriot and constitutionalist. Writing for the majority in Duncan, Justice Hugo Black quoted the words of the earlier (1879) case of Dow v. Johnson in noting that “the military should always be kept in subjection to the laws of the country to which it belongs, and that he is no friend to the Republic who advocates the contrary. The established principle of every free people is that the law shall alone govern, and to it the military must always yield.”