Would You Get Vaccinated for 1 Million Dollars? 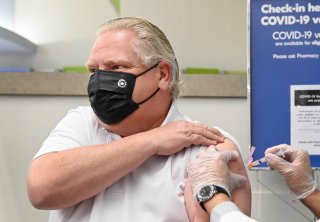 Here's What You Need to Remember: DeWine joined President Joe Biden and a group of bipartisan governors earlier this week to discuss methods of encouraging Americans to get vaccinated, as rates have abruptly declined compared to last month. During the meeting, however, DeWine didn’t surface the lottery idea.

Ohio Gov. Mike DeWine (R) announced on Wednesday an incentive program aimed at boosting coronavirus vaccines for people in his state that would give residents a chance to win $1 million.

DeWine said that Ohioans aged 18 and older who have received at least one dose of the vaccine will be eligible to enter a lottery that will grant a $1 million prize to five winners beginning May 26. And as part of a separate effort, the governor said he would offer five vaccinated teenagers full-ride scholarships to a public university in the state, including full tuition, room and board.

“Two weeks from tonight on May 26th, we will announce a winner of a separate drawing for adults who have received at least their first dose of the vaccine. This announcement will occur each Wednesday for five weeks, and the winner each Wednesday will receive one million dollars,” DeWine said in a string of tweets.

He added, “I know that some may say, ‘DeWine, you’re crazy! This million-dollar drawing idea of yours is a waste of money.’ But truly, the real waste at this point in the pandemic—when the vaccine is readily available to anyone who wants it—is a life lost to covid-19.”

The initiative follows other statewide efforts to get residents vaccinated like New Jersey offering free beers, New York giving free MetroCards for people who get inoculated at a subway site and West Virginia sending $100 saving bonds to people between the ages of 16 and 35.

The winning payouts will be funded by existing federal coronavirus relief money, according to DeWine. The Treasury Department has reportedly given state and local governments flexibility over how to spend the rescue aid.

When asked about DeWine’s lottery in Ohio, White House press secretary Jen Psaki said that state and local officials are the ones to decide how “to take new creative approaches to getting more shots and arms.”

“The Department of Treasury has comprehensive guidelines, but does not typically opine on each individual program or creative approach by different states,” she added.

DeWine joined President Joe Biden and a group of bipartisan governors earlier this week to discuss methods of encouraging Americans to get vaccinated, as rates have abruptly declined compared to last month. During the meeting, however, DeWine didn’t surface the lottery idea.

Only 35.8 percent of the U.S. population is fully vaccinated, according to Centers for Disease Control and Prevention data.

Ohioans entered into the lottery will be taken from the Ohio Secretary of State’s publicly available voter registration database, DeWine said. But those that aren’t in the database can use a webpage to sign up for the drawings.

The Ohio Department of Health will administer the drawings, with help from the Ohio Lottery Commission.