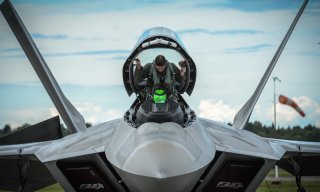 It’s unclear just what a sort of boost to payload or range the X-44 Manta may have offered over the F-22, but it would have benefitted not only from the increased internal payload space, but also the increased lift provided by the broader lifting body. That lift could help support more weight while also offering greater efficiency in fuel use.

Could the X-44 Manta be involved in the NGAD program?

Like most questions made about NGAD at this point, there’s no real way to definitely say for sure that the X-44 has been a part of the conversation leading up to fielding the F-22’s replacement. However, there are some parallels we can draw between the intent behind the X-44 and the goals in place for NGAD.

The premise behind the X-44 Manta was to build an even better stealth fighter than the F-22 Raptor, and in no uncertain terms, that is precisely the stated aim of the NGAD program. However, it’s also important to note that the X-44 concept was born in 1999, making its design just about as dated as the F-35 and the fighters NGAD will be tasked with killing–the Chinese J-20, and Russian Su-57, both of which also began development in the late 1990s and early 2000s. In other words, simply dusting off the X-44 concept and pushing it into production really wouldn’t meet the needs of the NGAD program. Of course, because so much of the X-44 is based on the out-of-production F-22, kicking off that production line would be about as expensive as simply starting from scratch with a new fighter anyway.

But that’s not to say the X-44’s DNA won’t find its way into the Air Force’s next top dog. As Air Force renderings have repeatedly shown, the branch seems intent on a wedge-shaped, tailless design for the NGAD. Many analysts have indeed pointed to the similarities between this concept and Northrop’s very real YF-23, but it’s important to note that these design images of the X-44 actually bear a stronger resemblance to what the NGAD is proposed to look like. So, if Northrop’s old stealth fighter is in this fight, it seems logical that so are advanced iterations of Lockheed’s more successful one.

The idea of using no conventional tail section and a wedge-shaped design keeps bubbling to the surface in other places as well–like this image from the Air Force Research Lab (part of a video they released a few years ago):

Or these images from Northrop Grumman:

Or this image from Boeing:

So, at the end of the day, the question might be: Will the Air Force draw its inspiration from wedge-shaped aircraft like Lockheed Martin’s proposed X-44 Manta and Northrop’s YF-23 Black Widow II for it’s next generation fighter? Or perhaps more aptly… has the whole aviation industry already done that?