XP-79: Why Shoot At Enemy Bombers When You Can Ram Them? 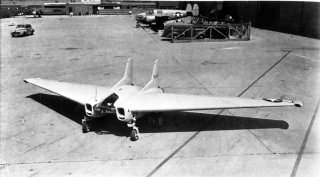 At the onset of World War II, a number of British Royal Air Force units were still operating bi-planes. By the end of the war, jet fighters were screaming across the sky in massive air battles for the future of Europe.

The famed Supermarine Spitfire so often credited with winning the Battle of Britain, for instance, offered its pilots little more than a floating reticle on the windscreen (advanced technology at the time) and fifteen seconds worth of ammunition if a pilot were so bold as to release it all in just one volley. As technology advanced, many aircraft were fitted with more powerful guns and more efficient engines, but dogfighting remained a close-quarters shoot-out — a far cry from the over-the-horizon missile engagements of today.

But it was that powerful belief that air warfare was changing that prompted a number of governments to pursue unique and original air combat ideas that, in hindsight, seem downright crazy. One such program was Northrop’s XP-79, colloquially known as The Flying Ram.

The XP-79 was a design conceived by John K. (Jack) Northrop himself, and was one of a number of platforms developed by Northrop to leverage the flying wing design. Today, Northrop Grumman continues to advance flying wing designs, most notably in the form of the in-service B-2 Spirit and forthcoming B-21 Raider.

The XP-79 was much smaller than its stealthy successors would be, with a fuselage built only large enough for a single pilot to lay down in horizontally, marking this aircraft’s first significant departure from common flying wing designs as we know them today. Northrop and his team believed that pilots would be able to withstand greater G forces if they were oriented in the laying position, and because the XP-79 was being designed to utilize jet propulsion, the shift seemed prudent. Northrop, in fact, had already used this cockpit layout in another experimental aircraft just a few years earlier, the MX-334.

Northrop originally designed the platform to use “rotojet” rocket motors, not unlike the German Messerschmitt Me 163 Komet, but issues with propulsion prompted a shift to using twin Westinghouse 19B (J30) turbojets instead. After the shift to these jet motors, the aircraft’s designation shifted as well, to XP-79B.

The most unusual thing about the aircraft wasn’t its unique propulsion, nor was it the unusual way the pilot rode — it was the way the aircraft was meant to engage enemy aircraft. The name “Flying Ram” wasn’t just a bit of artistic license. The heavy duty welded magnesium monocoque construction made the aircraft exceptionally strong — and that was by design. Northrop didn’t intend for the XP-79 to shoot enemy bombers down, he wanted it to fly right through them.

Instead of relying on heavy guns and lots of heavy ammo, the XP-79 would literally collide with other aircraft, using its strong wings to tear through the wings or fuselages of encroaching bombers.

The plan for the XP-79 was fairly straightforward: It was intended to serve as an interceptor aircraft that could engage an incoming fleet of bombers quickly and effectively. Pilots responding to an inbound air raid would rely on the on-board jet engines to power them through a series of high speed passes through bomber formations, downing aircraft as they tore through them.

The XP-79 was equipped with no other offensive weapons (though there were plans for cannons eventually), and instead would use the specially reinforced trailing edges of each wing to cut through enemy air frames. An armored glass cockpit positioned between the two large jet inlets was meant to protect the pilot during these high speed, mid-air collisions.

The aircraft was believed to have a top speed of 525 miles per hour with a service ceiling of 40,000 feet, but alas, the XP-79 was, to bastardize a Hunter S. Thompson quote, simply too weird to live.

The jet-powered XP-79B only took to the skies once, with test pilot Harry Crosby in the unusual cockpit. Crosby had the plane airborne for just over 14 minutes when he attempted his first banking maneuver at around 10,000 feet. Unfortunately, as the Flying Ram banked, it promptly went into an uncontrolled spin.

With Hitler already dead and the success of the atomic bomb attacks on Japan just a month prior, the need for a jet-powered interceptor that could literally cut through enemy bombers was just not as pressing. No XP-79 would ever fly again.