Yes, Iran Could Sink One of the Navy's Aircraft Carriers 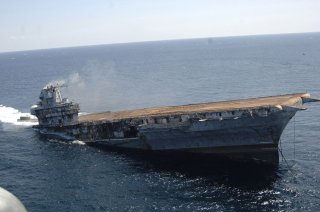 Key Point: The Navy's best warships aren't perfect and it would take a long time to replace losses in a major war. This is the warning from the former commander of the U.S. 7th Fleet.

The oil tanker attacks last year in the Gulf of Oman reinforce the need to reestablish a highly visible U.S. naval deterrent in the Middle East. For eight months in 2018, no aircraft carrier strike group plied the region, the longest such interruption this millennium. With the United States needing a more robust posture against Iran and confronting renewed challenges in Asia and Europe, several immediate measures and concerted longer-term efforts are critical to ensure America has the carriers it needs.

The requirement to maintain carrier presence in the Middle East is a critical part of a broader national security strategy, in which U.S. global security interests necessitate a worldwide force presence. Indeed, the Navy's mission demands remain as high as those of the Cold War, calling on ships to be everywhere seemingly at once, but today's fleet is less than half the size it was 30 years ago.

During the Obama administration, a “rebalance” supposedly allowed the Pentagon to focus on Asia and Europe while washing its hands of the Middle East. In reality, we never effectively rebalanced forces in the Indo-Pacific, and the situation on the ground forced us to remain deeply involved in the Middle East. Now with a growing Iranian threat, it would be imprudent to suddenly abandon the region, even as we face renewed challenges in the Pacific, Atlantic and Mediterranean.

Indeed, Iran’s threat to the region continues growing as its recent attacks against oil tankers in the Gulf of Oman demonstrate. Its reliance on violent sectarianism helps fuel Sunni extremist groups like ISIS. This also places Tehran’s proxies on the borders of key U.S. allies. Tehran can start upgrading its conventional and missile arsenals when the UN arms embargoes expires. It is also threatening to resume progress toward nuclear weapons.

The Trump Administration is pursuing robust sanctions, but these alone are likely insufficient to prevent Tehran’s aggression and reassure our regional allies.

Credible forward deployed military capability – like a carrier strike group – provides real options for American policymakers. Intelligence suggesting Iran was ready to move against U.S. interests in the Middle East demonstrates how the absence of such forces could embolden Iran. Responding to this intelligence, the prompt movement of the Abraham Lincoln Carrier Strike Group into the region has dramatically increased the U.S. force posture. Effective deterrence of Iran will require persistent, visible, and credible military capability.

A combination of far-reaching and short-term policy changes can address this challenge.

Most fundamentally, systemic shortcomings in U.S. defense spending and readiness undermine our deterrence and increase risks of military conflict, as underscored by the nonpartisan National Defense Strategy Commission to 2018.

The Navy simply lacks enough ships and aircraft to meet the increasing demands of its global mission. At a minimum, 12 aircraft carriers are needed for three to be three forward deployed at any given time. The decision to procure two carriers is a good start in attacking the shortfall, as is reversing the questionable budget proposal to retire the USS Harry S. Truman two decades early.

But only sustained political will from both the Administration and Congress can provide steady, predictable funding to enable the most cost-effective and efficient procurement and maintenance of the “Navy the Nation Needs.”

Working with the Navy, legislators should expedite the pace of carrier procurement from one every five years to every three or four. Even with these forward-thinking decisions, given the current maintenance requirements and long construction times, the Navy will still face a carrier shortfall for several years.

These changes would help address shortcomings in America’s defense posture for future administrations, and not just against Iran. But they would not be felt for some time, while Tehran is already lashing out.

In the shorter term, the United States could forward-deploying missile defense ships and other surface combatants to the Mediterranean, the Middle East and the Pacific. Currently, several minesweepers and patrol craft are the only homeported Navy ships between Spain and Japan; while very useful against Iran, alone they offer little deterrence. Coordination with and support for regional allies is critical too, including stronger multilateral maritime security and missile defense efforts.

The will to prepare is as important as the will to win, yet for too long, the United States has neglected a focused and disciplined approach to properly resourcing the U.S. Navy's fleet. The result was a painfully obvious gap in our deterrent capability in the Middle East for far too long last year, and it could well happen again.

American policymakers urgently must begin implementing quick and big fixes alike to restore readiness to our fleet in general and our carrier fleet in particular. The U.S. Navy must be able to handle a significant range of threats worldwide and to do so, must grow both in size and capability.

VADM John Bird (USN, Ret.), is the former commander of U.S. 7th Fleet. He is currently a member of policy projects at the Jewish Institute for National Security of America's (JINSA) Gemunder Center for Defense and Strategy.