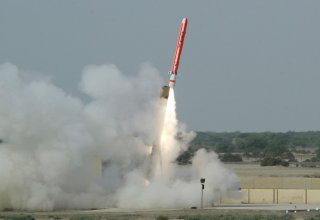 Key point: These weapons could be used to deter or destroy an invading Indian army. However, they also risk being used too easily or kicking off a larger nuclear exchange.

Of all the countries in the world, just nine are believed to have developed nuclear weapons. One member of this exclusive club is Pakistan, a country that occupies a unique strategic position on the Indian subcontinent. An ally of the United States and China and archenemy of India, Pakistan has developed a nuclear arsenal to suit its own particular needs. Unusually among the smaller powers, Islamabad has developed an arsenal of tactical nuclear weapons designed to destroy enemy forces on the battlefield.

Pakistan began developing nuclear weapons in the 1950s, but the country’s nuclear program accelerated in the mid-1970s after the detonation of “Smiling Buddha”, India’s first nuclear weapons test. Enemies since the end of the British Raj in 1947, India and Pakistan fought again in 1965 and 1971. In Pakistan’s view as long as India was the sole owner of nukes it could engage in nuclear saber-rattling and had the ultimate advantage.

Experts believe that Pakistan has between 150 and 180 nuclear bombs. It’s not clear when the country first had an operational, deployable weapon, but by the mid-1990s it had weapons to spare. On May 28, 1998, in response to a series of Indian nuclear tests, Pakistan detonated five devices in a single day, with a sixth device two days later. Four of the devices detonated on the 28th were tactical nuclear weapons, with explosive yields in the subkiloton (less than 1,000 tons of TNT) to 2-3 kiloton range.

Tactical nuclear weapons are important to Pakistan’s defense posture. Pakistan has a gross domestic product of just $305 billion, about the size of the state of Indiana. Pakistan has an active duty army of 767,000. Although the majority of the force is infantry, a substantial portion is fully mechanized with tanks, infantry fighting vehicles, self-propelled artillery, attack helicopters, and anti-tank missiles.

India has a GDP of $2.597 billion, an active army of 1.2 million, and greater amounts of equipment of every category. The Indian Army is larger by every metric, and in many cases fields larger numbers of qualitatively superior equipment--particularly tanks. In an all-out ground war, the Indian Army would almost certainly prevail. The Indian Army is sufficiently large that until 2004 it envisioned blunting a Pakistani ground offensive and then launching a counterattack with three “Strike Corps” of three divisions, all highly mechanized and each including at least one armored division.

Pakistan has an unknown number of tactical nuclear weapons, but we can get an idea of how many exist by counting delivery systems. A report by the Bulletin of the Atomic Scientists claims that the country has approximately 20-30 transporter-erector-launcher (TEL) vehicles designed to carry the NASR/Hatf-9 short-range ballistic missile. The TEL is a four-axle vehicle that can carry two or more NASR missiles. Assuming each TEL is armed with two NASR missiles with a single warhead each, Pakistan has somewhere in the area of 60 tactical nuclear weapons, or approximately one-third of its arsenal.

NASR is a solid rocket fuel missile with an operational range of just 43 miles. As the Bulletin report points out, short-range rules out using the weapons against meaningful targets in India, meaning they are more likely defensive weapons to be used against Indian Army units in Pakistani territory. This could also imply that the weapons are of very small explosive yield, as no country would want large nuclear explosions on its own territory.

One interesting question is that, given the fast-moving nature of modern warfare and the slow-moving nature of modern political decision making, Pakistan has already chosen target zones to launch against should Indian tanks roll into them and would delegate launch authority to the Army in times of war. If the political debate starts once the tanks arrive, the TELs could be overrun by the time a decision is made. Very small warheads would also have a very small area of effect, and a delay of just minutes could cause even a nuclear explosion to miss a battalion or more of tanks on the move.

Pakistan’s tactical nuclear weapons, while intrinsically unsavory, are at least defensive in nature. Unfortunately, given the number of times India and Pakistan have gone to war over the last eighty years, their use is theoretical than those of most countries. The use of nuclear weapons by one side could rapidly escalate to the use of larger, strategic weapons against populated areas by both sides.

Could Pakistan and India both give up their nuclear arms? Pakistan’s reliance on tactical nuclear weapons to offset weakness in conventional weapons will make it hard for Islamabad to divest itself of its nuclear arms. Once nuclear weapons are acquired it becomes extremely difficult to un-acquire them, and Pakistan will be no exception.