Yes, the U.S. Air Force Once Tried to Build Its Own 'Flying Saucer' 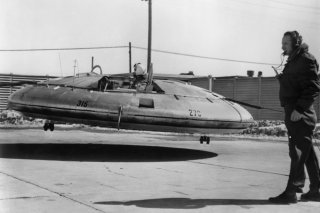 Key Point: Rather than a high flying saucer, the Army’s Avrocar was little more than a slow moving hovercraft.

Peter Suciu is a Michigan-based writer who has contributed to more than four dozen magazines, newspapers and websites. He is the author of several books on military headgear including A Gallery of Military Headdress, which is available on Amazon.com. This article first appeared earlier this year and is being reprinted due reader interest.