You have Heard of Sumos, but Do You Know Izumos? 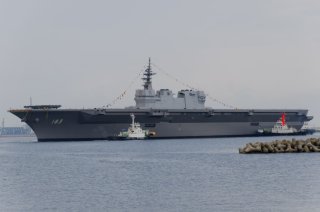 Here's What You Need to Know: The distinction between helicopter carriers and aircraft carriers remains dubious.

Meet the Izumo—the Japanese Maritime Self Defense Force’s largest ship, displacing a gargantuan twenty-seven thousand tons. The vessel’s lengthy, flat deck measures the length of two-and-a-half football fields at 248-meters. The Izumo typically hosts seven SH-60K helicopters designed to comb the seas for hostile submarines, plus another two search-and-rescue models—though it can carry as many as twenty-eight choppers if necessary. The Izumo also has several elevators to lower the helicopters to an internal hangar deck.

This distinction is especially dubious because unlike the predecessor of the Izumo-class, the Hyūga-class, which was armed with torpedoes and medium-range anti-aircraft and anti-submarine missiles, the Izumo does not carry any longer-range weapon systems to perform regular “destroyer” roles. Its only armament is a couple of short-range Phalanx and SeaRAM self-defense systems designed to shoot down incoming missiles seconds before they impact.

Japan doesn’t currently have any jump jets—but reports indicate it is actively looking into acquiring a highly capable type. The U.S. Marine Corps operates an F-35B Lightning II jump jet model designed to fly from small amphibious carriers—a type that saw its first combat test in Afghanistan on September 27, 2018. Japan hasn’t bought any F-35Bs yet, but it is license-building forty-two conventional F-35As.

Already, in May 2018, Tokyo released portions of a study concluding the Izumo and Kaga could be used to carry U.S. Marine jets assisting in the defense of Japanese soil. Earlier, however, a Japanese newspaper revealed that the government of Shinzo Abe has drawn up plans to—and evaluated the substantial cost of—acquiring as many as forty F-35Bs for the Japanese Air Self Defense force to replace aging F-15Js. Although F-35Bs are appealing because their lift fans would allow them to operate from the shorter civilian airfields of remote Japanese islands, Tokyo has also studied the cost of modifying the Izumo-class carriers to accommodate up to ten of them at a time.

However, the issue will remain emotionally fraught both in Japan and China—which explains why though the concept has clearly been mulled since the Izumo-class was first designed, discussion of the possibility has been veiled by terminology such as ‘helicopter destroyer.’ However, as Japan’s conservative ruling party pursues new records in defense spending to balance China’s expanding naval power, its interest in operating jump jets from carriers seems likely to increasingly go from implicit to explicit.

This article first appeared in October 2018 and is being republished due to reader interest.