You Won't Find This Constellation in the Sky. You'll Find It Out to Sea. 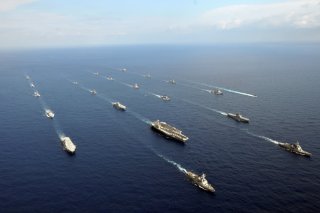 Here's What You Need to Remember: As a guided-missile frigate, it is believed that the Constellation-class will be armed with vertical missile launch tubes, though it could be a platform, which the Navy moves to arm with directed energy weapons in the future.

A potential hurdle to getting to a 355-ship Navy is a matter of dollars and cents. One of the goals of the Constellation-class project was to modify existing ship designs to meet U.S. Navy requirements. The service is currently suffering from so-called “sticker shock,” a reference to the astronomically high sticker prices of previous Navy projects and in particular the Littoral Combat Ship program

The LCS is a group of two different classes of ships designed to undertake a number of missions in shallow coastal waters but has been considered both an engineering failure and has cost taxpayers considerably more than initially projected.

The Navy has also expressed a desire for the smaller frigates to keep up with surface groups in order to conduct anti-submarine warfare and counter surface ships, in addition to defending against boat swarms and conducting convoy defense with an emphasis on already-existing systems rather than newer untested systems in order to keep costs down.