Your History Book Forgot This: Japan's Occupation of Alaska 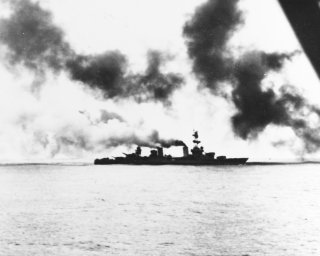 As both sides could not call upon or carrier- or land-based warplanes, they fought one of the few long-range naval gunnery duels of World War II, exchanging hundreds of eight- and six-inch shells over ranges as high as 12 miles — including 800 eight-inch shells from the Salt Lake City alone. The American destroyers and one of the Japanese cruisers also darted closer to launch torpedoes, though none of them hit.

In the end, the American ships inflicted 14 casualties on the Japanese cruiser Nachi, but the Salt Lake City was nearly crippled with the loss of seven sailors after being struck in succession by six eight-inch shells from the Japanese heavy cruiser Maya. The weaker American force disengaged at noon under the cover of a smoke screen, while the Japanese also withdrew, fearing the arrival of U.S. air support.