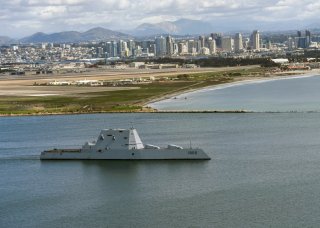 Here's What You Need to Remember: The Navy promised Congress a larger destroyer requiring only 95 crew instead of 300 thanks to automation, with adequate space and power-generation capacity to deploy railguns and laser weapons. Here's where the problems entered in.

In addition to rapid-firing 6” guns, the Zumwalt had eighty Mark 57 missile vertical-launch cells dispersed across her bow and stern to minimize secondary explosions. These could target and launch Tomahawk land-attack cruise missiles, ASROC anti-submarine rockets, or quad-packs of Evolved Sea Sparrow medium-range air-defense missiles. The Zumwalt’s spacious landing pad and hangar could accommodate up to three MQ-8B helicopter drones or two MH-60R helicopters, which can carry Hellfire anti-tank missiles or torpedoes. The destroyers also boast a capable dual-bandwidth sonar for hunting submarines but lack the torpedo armament found in Arleigh Burkes.

The Navy is also working on networking sensors between its submarines, surface warships, helicopters, patrol planes, and attack jets through “Cooperative Engagement” technology. Thus one strategy could see distant “spotter” generating targeting data using active radar, then transmitting it to a sensor-ghosting Zumwalt to perform the strike.