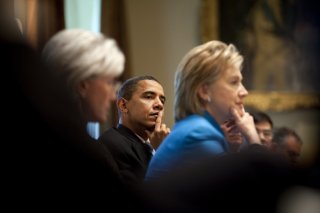 The most politically outrageous statements made by a Democratic pol in the last two weeks did not happen October 13 in Las Vegas. Instead, they came from the Democratic president himself in a series of remarks in California. His point, politically inadvisable as it would be for a 2016 candidate, was that the U.S. economy is not in dismal shape, at least not compared with the recent recession and with other nations. “There’s almost no measure by which we're not better off than when I took office and when we started this process for change,” he said in San Francisco on October 10.

Of course, President Obama is not running in 2016, and so long as Vice President Biden remains out of the race no candidate is indelibly marked as representing continuity rather than change. Change is preferable, having elevated Presidents Obama, Clinton and Carter to the White House, as well as several Republicans. Former secretary of state Hillary Clinton comes the closest to representing continuity. But Republicans have thus far struggled to make the case stick that a Clinton administration would look the most like Obama’s and, because of that, voters should look elsewhere. Concerns about Clinton’s time at the State Department are more with her email server and less with how she served the Obama administration’s disappointing rebalancing to Asia or its shortsighted foray into Libya. At the moment, Clinton simply doesn’t come across as more of the same. As Jacob Heilbrunn writes in the National Interest, “When it comes to foreign policy, she is to the right of Obama. When it comes to domestic policy she is to the left of him.”

Instead, President Obama is working to strengthen his own legacy by yoking it to the improving economy. Points can be marshaled to defend this. U.S. economic growth in 2015 will outpace that of all the other Group of Seven (G7) advanced economies, three of the “BRICS” emerging markets and Mexico, says the IMF. The U.S. unemployment rate is less than that of twenty-five of the twenty-eight European Union countries. And the World Economic Forum’s latest ranking of global competitiveness puts the United States behind only Switzerland and Singapore.

However one might wish to qualify it—temporarily, incidentally, relatively—the American economy is in an enviable state. What makes Obama’s remarks politically outrageous is that American politics are largely blind to even the lightest rosy tinge applied to the present. It’s easier to see red. More Americans believe the economy is getting worse than better, and three of every five Americans are dissatisfied with the way things are going in the country today. In such a state, running on change is simply smart politics, which is why, as the Wall Street Journal pointed out of the Democrats’ debate, “not one of the five candidates even attempted to defend the results of President Obama’s economic policies.”

Smart politicians are running on change, but smart policies are stalled, and here is a reason why. When the rhetoric that things are dismal bleeds over into policymaking it removes from serious consideration and sustained attention policies reserved for an illusory time when things are, indeed, better. One example: the funding of the U.S. transportation system.

The price of oil was near $100 a barrel last year and now it is less than half that, with no reason for a sudden reversion in sight. The United States is producing more oil than any time in the last forty years, and the percentage of Americans who report spending more on gas has fallen considerably in the last year, according to Gallup. Meanwhile, U.S. infrastructure needs work. One does not need to accept every letter of the oft-cited American Society of Civil Engineers infrastructure report, in which the United States receives a “D+,” to come to the conclusion that some repairs are needed.

It would seem, then, an opportune time for a modest increase in the federal gas tax that funds such repairs and has not seen a raise since the first year of President Clinton’s administration. The federal gas tax is currently 18.4 cents per gallon. Even increasing it short of the 30 cents per gallon it would be today had it been indexed to inflation, or indexing it to inflation going forward, is a start. Such an increase could even be conditional on the above-mentioned trends continuing. Instead, as the Washington Post editorial board wrote last week, “Congress is poised to temporarily patch the country’s transportation funding system—like it has nearly three dozen times over the past several years.”

“Privately, many members of Congress know that raising the federal gas tax is a ready and reasonable way to pay for the nation’s infrastructure. Publicly, most lawmakers are too spineless to face up to this reality.”

“The whole spectacle is, well, pathetic,” the board concludes.

A frequent refrain during the recent recession was to list all the things the United States could have done—should have done—in better times that were impossible during the 2007-2008 downturn. In politics, however, better times only exist in the past through nostalgia or the future through optimism. Both can stir public sentiment, but neither is useful without knowing when things are good enough at the moment to act. Favoring a modest gas tax increase now towards U.S. infrastructure is a smart first step in demonstrating such a grasp on reality.