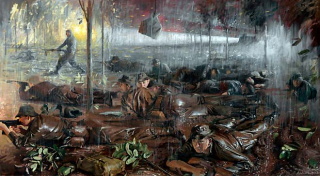 America didn’t fight the Vietnam War alone. Though we tend to think that the United States did all the fighting, there were other nations as well.

Australia was one of them. Some sixty thousand Australians served in Vietnam, in what the Australian government—though not Australian antiwar protesters—saw as a necessary struggle to keep Communism from invading the Land Down Under.

The epic battle of Battle of Long Tan, where one hundred Australians defeated as many as 2,500 Viet Cong, is to Australia what Khe Sanh and Ia Drang are to America. The story began in the spring of 1966, when the First Australian Task Force, composed of Australian and New Zealand troops, set up a base at Nui Dat, southeast of Saigon. After the Viet Cong mortared the base on August 17, 1966, the First ATF dispatched a force to locate the weapons. The 105 soldiers of D Company, Sixth Battalion, Royal Australian Regiment, backed by a three-man New Zealand forward observer team to call in artillery, were dismayed to learn that they would be missing a concert at the base. What they didn’t know was that Australian signals intelligence had been intercepting radio signals from a Viet Cong regiment that appeared to be headed toward their patrol area.

Music would soon be the least of the Australians’ worries. On the afternoon of August 18, as they arrived at the Long Tan rubber plantation, D Company was hit by the entire Viet Cong 275th Regiment. The attackers were no ragged band of part-time insurgents: the 275th was a Viet Cong Main Force unit of well-armed, full-time guerrillas in uniform. These VC knew their business: pouncing on an exposed and outnumbered enemy column was a tactic they excelled at.

It was just after 4 p.m. when one of D Company’s platoons was ambushed, killing or wounding one third of its men. D Company commander Maj. Harry Smith and his soldiers soon realized this wasn’t a hit-and-run guerrilla attack, but an all-out assault by regular soldiers. As if being outnumbered twenty-five to one wasn’t bad enough, monsoon weather grounded any air support.

Major Smith managed to draw his platoons together and organise his force into a defensive perimeter around the company headquarters. Soldiers went to ground there and withstood repeated enemy attacks, including massed human-wave assaults. They held firm and controlled their fire, taking a steady toll of the assaulting enemy. Any movement by the Australians drew a furious hail of automatic weapons fire from enemy assault rifles and machine-guns and enemy sniper fire from the trees. The thunderstorm added to the deafening din of the battle, making all communication difficult.

D Company couldn’t call in air support, but it could call in artillery. Without the firepower of the eighteen guns at Nui Dat, which pumped out a combined a hundred rounds a minute, the outnumbered Australians would almost certainly have been overrun.

As it was, D Company found itself on the brink of annihilation as ammunition ran low and the VC kept coming in what seemed to be human wave assaults. As one Australian survivor described it:

A solid line of them—it looked like hundreds—would suddenly rush us. The artillery would burst right in the middle of them and there would be bodies all over the place. The survivors would dive for cover beside these bodies, wait for the next attacking line, get up and leap over the dead to resume the rush. They were inching forward all the time over their piles of dead.

Two daring Australian helicopter crews flew their Hueys through the monsoon to drop ammunition through the trees. Nonetheless, as darkness began to fall at 6 p.m., D Company began to fear that just one more enemy assault would overrun them. But then an hour later, the VC were hit by a relief force of Australian infantry in M-113 armored personnel carriers that tore through the Communist lines. Suddenly, as so often in Vietnam, the enemy suddenly disappeared.

The stunned and battered Australians were convinced they had lost the battle, which had cost them eighteen dead and twenty-four wounded. But as they searched the battlefield, they found 245 Viet Cong dead. Given that the Communists always tried to conceal the true losses by removing their dead from the battlefield, VC casualties must have been far higher.

Australia and the United States both heralded Long Tan as a major victory in an otherwise frustrating and inconclusive war, with D Company being awarded a U.S. Presidential Unit Citation. For their part, Communist leaflets and radio broadcasts claimed to have almost wiped out the Australians. Hanoi’s propaganda was a gem of misinformation:

The Australian mercenaries, who are no less husky and beefy than their allies, the US aggressors, have proved as good fresh targets for the South Vietnam Liberation Fighters… [who] put out of action 400 Australian mercenaries, thus annihilating two full-sized companies, heavily decimated another, set a fire three M113 armoured cars, downed one US jet fighter and captured a great quantity of arms and munitions.

…The day before, 17 August, the LAF in the same province wiped out over 100 Australian mercenaries. For these victories the South Vietnam LAF Command had decided to award a Liberation Military Exploit Order Third Class to the victorious units.

Unfortunately, the survivors of Long Tan went home to face the same problems that confronted American GIs. Though the Australian public initially supported military intervention, antiwar protests became widespread by 1967. As in America, the Australian draft (many of D Company’s soldiers had been conscripts) sparked opposition. Perhaps more painful was that some veterans’ groups, made up of Australians who served in World War II, excluded returning soldiers on the grounds that Vietnam was not a “real war.”

Australia suffered 521 dead and three thousand wounded in Vietnam. Their only monument in the nation of Vietnam today is at Long Tan.