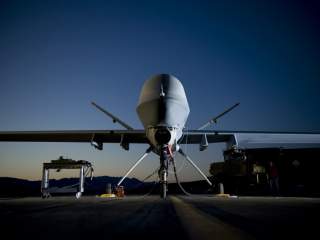 The U.S. Air Force is set to massively increase the size of its unmanned aircraft force, service officials announced Dec. 10. The move is part of the service’s latest attempt to ease the pressure on its current drone force, which is under enormous stress after nearly twenty years of non-stop combat.

“Our RPA [Remotely Piloted Aircraft] enterprise was born in combat and recently surpassed 20 years of service, many of which were executed at surge levels,” said Air Combat Command (ACC) commander Gen. Hawk Carlisle.

Under the new plan, the Air Force will double the number of “remotely piloted aircraft” squadrons and add as many as 3,000 more people to its drone units. But the Air Force needs more money and resources to keep pace with the demand for drone strikes. “Resourcing these changes is not within ACC's direct control,” Carlisle said. “So we will have to work with the Department of Defense, the White House and Congress on the resources to get this done.”

Carlisle said that the move is part of an overall strategy to reduce pressure on the drone force. “We owe it to our Airmen to remove the daily stressors that are responsible for the challenging environment they are operating in,” he said.

The Air Force’s drone fleet has been pushed to the breaking point over the years. In fact, the service has resorted to using contractors to fly some missions. The legality of the move is a hotly debated issue, but Air Force officials have assured members of Congress that the contractors are not flying combat missions—mostly transit flights and reconnaissance.

The Air Force is also taking other steps to help alleviate stress on the drone force.

2) Create a new wing to normalize organizational and command and control structures relative to other weapon systems.

5) Decrease the heavy burden of persistent in garrison combat operations by increasing RPA manning and associated resources by 2,500-3,000 Airmen.

8) Study the feasibility of a single specialty code for RPA maintenance personnel.

The Air Force is also looking at expanding its basing for the drone force—Arizona and Virginia are locations under consideration. Basically, the service wants to co-locate its drone aircraft wings with its intelligence analysts. "As we strategically analyze the RPA community, we need to take a hard look at our operating locations," Carlisle said.  "Expanding our RPA basing to potential sites such as Davis-Monthan [Air Force Base, Ariz.], Langley [AFB, Va.], and a few overseas locations is a discussion we need to entertain as we stand up a new wing. We would look to take advantage of the synergy between RPA operations and command and control or intelligence processing, exploitation and dissemination nodes.”

The end goal for the Air Force is to create a sustainable drone force that operates like a normal weapons system. The current model was setup as an ad hoc structure because of immediate wartime demands. “Ultimately, CPIP [Culture and Process Improvement Program] is about establishing a coherent, Air Force wide strategic plan that enables us to continue to provide this incredible capability to the joint force by moving the RPA community toward the sustainment model we've established for other Air Force weapon systems.”