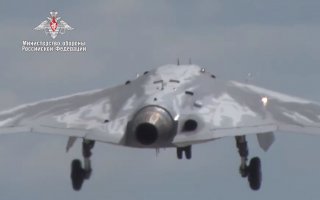 Russia’s fifth-generation Su-57 air superiority fighter will be able to direct multiple loyal wingman drones, according to a defense industry insider. “Currently, the options of controlling strike drones from a Su-57 cockpit are being worked out. A fighter jet is expected to carry from two to four Okhotnik drones,” the insider told Russia’s TASS state news outlet.

The Sukhoi S-70 Okhotnik-B, Russian for “Hunter-B,” is an upcoming sixth-generation heavy stealth drone that will fly alongside the Su-57. Russia’s Defense Ministry released video footage of the Okhotnik-B’s first flight in 2019, showing it circling above the Chkalov State Flight Test Center in Astrakhan—the full flight lasted for twenty minutes, according to the Defense Ministry’s accompanying press statement. The Okhotnik-B boasts a flying wing design, a take-off weight of around twenty tons, a maximum speed of around one thousand kilometers per hour, and an operational range of six thousand kilometers. The drone is believed to be powered by either the older AL-31F engine or the more advanced AL-41F engine that is also used by the Su-35S air superiority fighter.

As a multi-role unmanned combat aerial vehicle (UCAV), Okhotnik-B is slated to support the Su-57 to which it is attached in a wide range of battlefield functions. The drone will likely fill a valuable reconnaissance role, leveraging its extensive suite of onboard sensors to feed the Su-57 information through data-link. A coterie of four Okhotnik-B drones could extend the Su-57’s battlefield awareness, providing targeting information to help cue the fighter’s long-range R-37M missiles. The drone has combat capabilities, with an internal weapons bay carrying up to two thousand kilograms of munitions, although the extent of its armament loadout remains unclear. With their design focus on stealth performance, four such drones working in tandem could present a legitimate threat to vulnerable assets or infrastructure behind enemy lines; more importantly, they can carry out dangerous strikes without putting the Su-57 pilot at risk.

In an extensive interview given to Russian media, test pilot Evgeny Frolov explained that the Okhotnik-B shares the same artificial intelligence command interface as its Su-57 mothership. Frolov confirmed that the drones can track and target enemy units in a fully autonomous fashion. The current, pre-production version of the drone offers redundancy with overlapping manual controls, but the test pilot said that the serial version of Okhotnik will be entirely autonomous: “this system will be fully automated in the future, it will likely not have these [manual] control features, and manual handling will likely not be present.”

Three more Okhotnik-B prototypes are currently in production and slated to undergo flight tests through 2023. It was recently reported that the Okhotnik platform will not be exclusive to Russia’s next-generation aircraft. The new Project 23900 Ivan Rogov amphibious assault ship, which is scheduled to be commissioned for Russia’s Northern Fleet in 2027, will allegedly carry four Okhotnik drones. The first Okhotnik-B units are projected to enter service as the Su-57’s loyal wingman starting from 2024.