Russia's Checkmate Stealth Fighter Is No F-35 (And Not Even Real, Yet) 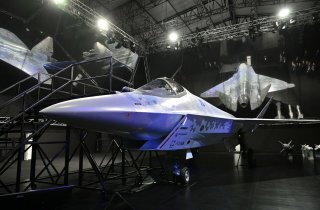 There are various unknown unknowns and challenges existing alongside much of the discussion, hype and hyperbole surrounding Russia’s new fifth-generation fighter jet, known as Checkmate. To date, there are mock-ups of the new jet, which Sukhoi recently unveiled at an aviation show, but the actual aircraft does not yet exist. Thus, the emerging Russian F-35-like aircraft has a long way to go before it can operate in war.

Digital engineering and other rapid prototyping techniques have made it possible for engineers to rapidly develop weapons and platforms. Still, it may be a long time before the Checkmate jet can actually be an operational, deployable aircraft.

For example, how are the seams of the Checkmate jet bolted to ensure stealth performance? What kinds of composite materials, if any, are part of the frame? Most importantly, how quickly and successfully can the jet be produced. Also, is there a standing production operation capable of the task? Then there is the unavoidable question of sustainment. After all, once an aircraft is built it needs to be maintained. Additionally, the engine performance needs to be monitored, electronics must be tested for optimal functionality and radar-absorbent coating materials must be preserved. Is there any kind of infrastructure to perform these critical functions? Without them, there can’t really be much of an aircraft.

To date, the largest challenge for Sukhoi likely relates to the unknowns associated with building the Checkmate jet. These unknowns include the sophistication of its sensors, onboard computing, level of artificial intelligence and automation, and the performance of its avionics, navigational system and electronics. The aircraft will need advanced fire control to ensure proper weapons interface and digital systems capable of selecting weapons, loading them and firing them at targets.

There are simply too many unknowns at the moment for the Checkmate jet, which may ultimately show tremendous promise as a breakthrough weapons system. One thing to watch is whether Checkmate developers use digital engineering during the developmental process of the aircraft. After all, advanced simulations and computer programs can replicate specific performance parameters associated with weapons systems and design attributes. For example, the digital engineering process has been used with great success in several major U.S. weapons programs such as the now airborne sixth-generation fighter jet and new Ground-Based Strategic Deterrent. If engineers are using digital engineering to build the Checkmate jet, then that may improve the prospects for the aircraft to transition from its present condition to a war-ready deployable fighter.