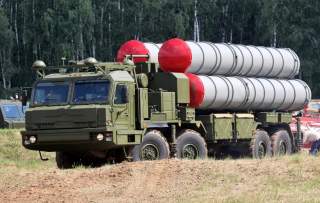 The Russian military expects to receive the first examples of the new Almaz Antey S-500 air and missile defense systems in the near future. Meanwhile, tests are continuing on the advanced S-350 Vityaz system, which will eventually replace the existing S-300PS air defense batteries.

“We expect the first samples of the S-500 anti-aircraft missile system to be delivered soon,” Lt. Gen. Viktor Gumyonny, commander of the Russian Aerospace Forces’ air defense troops, told Rossiya-24 according to TASS.

The new weapon—which will form the upper tier of Russia’s layered integrated air defense system—is expected to be able to engage targets at altitudes of about 125 miles—or 660,000 feet. That means that S-500 will be able to engage targets such as incoming ballistic missiles in space at ranges as great as 400 miles. The first regiment of S-500 will be deployed to protect Moscow and central Russia.

The S-500 is expected to able to detect and simultaneously attack up to ten ballistic missile warheads flying at speeds of twenty-three thousand feet per second. It is also reportedly being designed to use hit-to-kill interceptors—a design with similarities to Lockheed Martin's Terminal High Altitude Area Defense (THAAD) system.

Meanwhile, the Russian military is already testing the S-350 Vityaz mid-tier mobile air and missile defense system. The new weapon will replace the older S-300PS and complement systems like the Buk-M3, S-300VM4, S-400 and S-500.

The S-350 is built around a new advanced active electronically scanned array (AESA) radar and a new mobile command vehicle. A normal battery would include command vehicle, two radars and eight launch vehicles. The S-350 uses the same active radar-guided hit-to-kill interceptors as the S-400—and can engage targets at ranges of 75 miles at altitudes of about 100,000ft. It can engage 16 targets simultaneously while a total of 32 missiles at any one time.

The Russians are expected to network the S-500s with their S-400, S-300VM4 and S-350 and other weapons as part of an overall integrated air-defense network. As one U.S. industry official noted, while the Russian military industrial sector suffered greatly in the aftermath of the collapse of the Soviet Union, somehow Moscow managed to continue developing advanced air defense system without much degradation in capability. Indeed, some of these new weapons—like the S-500—are so capable that many U.S. defense official worry that even stealth warplanes like the F-22, F-35 and the B-2 might have problems overcoming them.