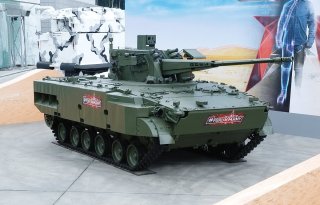 The Russian military will reportedly complete the trials of its multi-functional projectiles for its latest Derivatsiya-PVO anti-aircraft system later this year. The gun is capable of firing smart munitions to fight air targets more effectively than other anti-aircraft platforms.

The 2S38 Derivatsiya-PVO anti-aircraft artillery system, which was officially unveiled at the Army-2018 International Arms Show, "rolled through" Moscow's Red Square for the first time during the Victory Parade on June 24, 2020. The parade had originally been scheduled for May, but was delayed due to the ongoing novel coronavirus pandemic.

"The trials of ammunition with multi-functional projectile will be completed in 2020," the press office of the Uralvagonzavod defense manufacturer, which is part of the state tech corporation Rostec, told Tass last Friday.

It isn't clear entirely what the smart munitions can do but precision-guided munitions have a much higher rate of success and hence increased lethality. In recent years the U.S. military has tested various smart artillery rounds such as the 155mm BONUS shell developed by BAE Systems Bofors and France's Nexter.

BAE has described BONUS as a "fire-and-forget munition capable of successfully combating any armored vehicle. Compatible with the majority of existing artillery guns, BONUS is handled just like a conventional shell. When launched from any 155-mm artillery system, the BONUS carrier shell separates to deploy two sensor-fuzed munitions that then search for targets within a given footprint, up to 32,000 square meters."

The self-propelled Derivatsiya-PVO surface-to-air artillery system is mounted on the chassis of a BMP-3 infantry fighting vehicle (IFV), and like the T-14 Armata tank, the crew sits inside the armored hull and operates the unmanned turret remotely.  The vehicle is outfitted with a combat module with a 57mm automatic gun, which is capable of firing 120 rounds per minute, but it can carry just 148 rounds – and even with "smarter munitions" it is likely the anti-aircraft could go deplete its ammunition supply quickly even when firing short bursts.

The platform is primarily designated to fight drones, cruise missiles and aircraft weapons in the close-in zone, but the anti-aircraft artillery weapon platform is also capable of striking ground targets.

The Derivatsiya-PVO requires no radar station and features an onboard optoelectronic guidance and reconnaissance system and the advanced fire control technology, which boosts its stealth properties: it can effectively spot targets in any conditions with the help of its 2S38 TV and thermal imaging channels, while it can also staying radar invisible to the enemy.