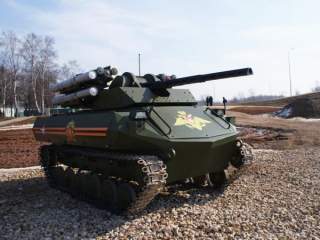 Russia is developing a compact robotic tank that it hopes to sell on the international market. But while Moscow is hoping to export the unmanned combat vehicles, it’s not clear if Russia’s own military forces will adopt the new weapons.

Called the Uran-9, the robotic armored vehicle is not intended to replace main battle tanks such as the T-90 or T-14 Armata. Rather, the diminutive machine is designed to provide fire support to special operations forces and to conduct reconnaissance.

“Russian developers possess all of the required competencies to create modern military robotics that will be in demand on the international market,” said Boris Simakin, head of Rosoboronexport’s analysis and long-term planning department. “This is a fast-growing segment of the arms market, so Rosoboronexport will develop and implement a long-term marketing strategy for promoting such pieces of hardware, including as part of integrated security projects.”

Rosoboronexport expects that the robotic combat vehicle will mostly be used to provide fire support for counter-terrorism units, reconnaissance units and possibly light or mechanized infantry forces. “The Uran-9 will be particularly useful during local military and counter-terror operations, including those in cities. Its use will significantly reduce personnel casualties,” the Russian state-owned export company said in a statement.

Each Uran-9 combat vehicle is armed with a 2A72 30mm automatic cannon, a 7.62mm machine gun and M120 Ataka anti-tank guided missiles, giving the machines a significant punch. The inclusion of the Ataka missiles gives the diminutive robot the capability to engage and destroy the most modern battle tanks from ranges as great as 8,000 meters. The robots are also fitted with an array of sensors—including a laser warning system and target detection, identification and tracking equipment.

The Uran-9 system is not just a single vehicle. It’s a complete system that can be deployed with an infantry unit. The system consists of two robotic reconnaissance/fire support vehicles, a truck to carry those robots and a mobile command post.

The Uran-9 does not have a direct Western equivalent—but the U.S. military has been working on unmanned ground vehicles over the past two decades. The technology is still in its infancy, but the Uran-9 is a herald of things to come.

As unmanned technology continues to improve—and work on artificial intelligence progresses—it is possible that most future ground combat vehicles could be unmanned. Indeed, it is possible that manned main battle tanks like the T-14 Armata and M1A2 Abrams are the last of a dying breed—which will be supplanted by robotic replacements. Only time will tell.