Russia's Next Super Weapon To Crush America in Combat Is... 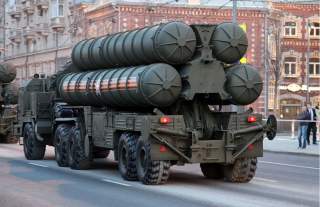 Russia has apparently conducted a successful test launch of its Nudol direct ascent anti-satellite missile. This is the second test of the new weapon, which is capable of destroying satellites in space. The weapon was apparently launched from the Plesetsk test launch facility north of Moscow.

At press time no additional details are available. However, if the report is correct, that means the Russians have developed a means to attack the space-based navigation, communications and intelligence gathering tools that are the sinews of U.S. military operations.

It should come as no surprise that Moscow has embarked on the development of such a weapon. Attacking America’s space-based assets would be an effective means to disrupt U.S. military operations, which is a fact not lost on the Kremlin—or on the People’s Republic of China. Indeed, Beijing has previously tested such weapons—most notably in 2007 when it destroyed a satellite in orbit.

Washington, too, has shot down a satellite that was in a decaying orbit in 2008 using the U.S. Navy’s Aegis system. However, the United States has been vocal in calling on other nations to desist from such activities. Indeed, many space experts warn that the debris from such tests pose an extreme hazard, not just to military satellites but all space activity. Even small fragments can severely damage a spacecraft given the extreme velocities involved.

Given the Russians expertise in developing air and missile defense systems, it’s not likely to have been a huge technological leap for Moscow to develop the Nudol. Indeed, the Russians have boasted that their developmental S-500 will also be able to engage incoming ballistic missiles in space.

The S-500—which will form the upper tier of Russia’s layered integrated air defense system—is expected to be able to engage targets at altitudes of about 125 miles—or 660,000 feet. That means that S-500 will be able to engage targets such as incoming ballistic missiles in space at ranges as great as 400 miles. The first regiment of S-500 will be deployed to protect Moscow and central Russia.

The S-500 is expected to able to detect and simultaneously attack up to ten ballistic missile warheads flying at speeds of twenty-three thousand feet per second. It is also reportedly being designed to use hit-to-kill interceptors—a design with similarities to Lockheed Martin's Terminal High Altitude Area Defense (THAAD) system.