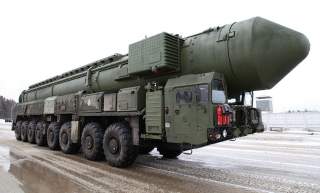 Russia will test-fire an ICBM from a missile-equipped “death train” in 2019, according to Russian media.

The Barguzin “railroad combat complex,” or BZhRK, will be armed with six RS-24 Yars ICBMs, a fifty-five-ton missile that reportedly carries up to ten nuclear warheads, and is already deployed in fixed silos and mobile truck-mounted launchers. There will be five railroad missile regiments, each consisting of one train and six ballistic missiles. Operational deployment is slated for 2020.

Barguzin is not a new concept. It is actually a revival of train-launched ICBMs, fielded by the Soviet Union beginning in the 1960s. The twelve trains, equipped with three RT-23 Scalpel missiles each, were phased out by 2005.

“As it was impossible to precisely determine the place where they could fire a nuclear missile, they were dubbed as ‘death’ or ‘phantom’ trains,” reported Sputnik News.

The new trains will carry six missiles instead of three. A Russian defense industry official told Sputnik News in 2015 that the missile trains “will not need any specific big cars. They will completely coincide with the existing parameters of railcars and will therefore be completely hidden from a foe's reconnaissance and surveillance. Moreover, the system will enable launches virtually everywhere on the railway bed in contrast with the previous system that required special launch conditions.”

A 2016 Russian media article, translated by the U.S. Army’s Foreign Military Studies Office, stated that Barguzin “will restore the ground triad of the RSVN [Strategic Missile Troops] of the Soviet era, augmenting the silo-based and mobile ground-based intercontinental ballistic missile systems that are in the inventory.”

Russia's move has caught the eye of China, which itself tested a rail-mounted ICBM in 2015. A Chinese media article suggests the missile train is “a countermove in response to America’s global missile defense system and C-PGS (prompt global strike) program” of hypersonic missiles.

Are we entering a new strategic arms race? Building mobile ICBMs suggests that Russian leaders feel less than secure with their current nuclear portfolio versus the Americans. The irony, of course, is that America is developing a new ICBM because it doesn’t feel its nuclear deterrent is secure against the Russians.

The United States itself once toyed with train-based ICBMs. In the 1980s, the Reagan administration approved a plan to base MX (Peacekeeper) missiles on railroad cars that, upon command, would disperse throughout the continental U.S. rail network. The program was later terminated.

Train-based ICBMs do offer some advantages over missiles in fixed silos, namely that the enemy can never be sure where they are—or, more accurately, where all of them are at any given moment. But as a 2014 RAND study pointed out, rail and truck launchers have their drawbacks. Maintaining a missile on a train is more difficult than in a silo, while rail lines and roads can be blocked by snow, which tends to restrict railroad ICBMs to warmer climates. In addition, because there are only a limited number of rail lines and highways in an area (think Siberia), enemy surveillance can focus on a few areas. And, once located, mobile missiles are more vulnerable than ICBMs in hardened silos.