Afghanistan Could End Up in a Civil War. Time For U.S. Forces to Leave. 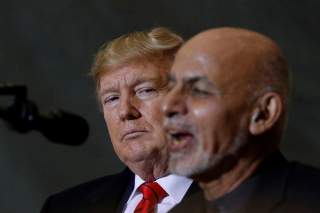 While most U.S. media have been focused on the potential for a ceasefire between U.S. forces and the Taliban, the political scene in Kabul is on the verge of a complete breakdown.

Three separate political groups in Kabul are threatening to form a government of their own in opposition to current President Ashraf Ghani—and against each other. Before the political situation in Kabul completely breaks down and American troops get caught in a multi-sided civil war—which perversely might not even include the Taliban—we must quickly and methodically withdraw our troops.

After almost five tumultuous months of bickering and repeated charges of fraud, the Afghan Independent Election Commission officially announced the winner of the 2019 presidential election on Tuesday, declaring incumbent Ashraf Ghani the winner with 50.6 percent of the vote. The announcement of this razor-thin margin of victory after months of uncertainty set off a firestorm of political anger among some of the losing candidates.

Current “CEO” and presidential candidate Abdullah Abdullah claims 300,000 fraudulent votes were cast for Ghani, without which Abdullah would have won. He is now threatening to form his own “inclusive government.” Presidential candidate Rahmatullah Nabil rejected the outcome and said both Abdullah and Ghani should step down and a new government should be formed with the Taliban.

Meanwhile, two other candidates, former Afghan Prime Minister Gulbadin Hekmatyar and Mohammad Hakim Torsan rejected the outcome, with the latter saying he and his party “will wait for a short while to see if they (Ghani and Abdullah) come down from their ignorance; otherwise, we will declare our own govt (sic).” Even Ghani’s 2014 vice president, Abdul Rashid Dostum, claimed Ghani’s victory was based on fraud and said he is “supporting the announcement of the inclusive government of Abdullah Abdullah.”

All this political drama could not possibly come at a worse time for the Trump administration. After almost two years of on-again/off-again negotiations with the Taliban, U.S. Forces and Taliban fighters are set Friday night to begin a seven-day trial “reduction of violence” period, after which a more comprehensive ceasefire might be signed. The primary objective of the reduction in violence is to foster political reconciliation between the Taliban and the Afghan government, hopefully leading to a formal peace agreement.

In response, Trump has reportedly promised to reduce America’s troop strength by “a large number” in the near term while considering withdrawal of the remaining 8,000 at a later date. Even with a unified, fully committed Afghan government this arrangement was fraught with risk and had a low chance of actually ending the war. To date, the Taliban has still not agreed to recognize the Afghan government as having the authority to negotiate ultimate peace. With chaos reigning in Kabul now, there is no chance the Taliban will negotiate in good faith to end the war.

It is crucial that the United States not get sucked into this politically spiraling situation in Kabul and risk increasing the danger to U.S. forces in the region. There is absolutely no basis for a politically viable outcome that we could trust, regardless of what the U.S. might negotiate. We should have seen this coming.

The first presidential election in Afghanistan post-9/11 was conducted in 2004 and was riddled with accusations of fraud in which Hamid Karzai was declared the winner. The messiness of the election was chalked up to the difficulties of post-war Afghanistan and in any case, many believed the problems would be solved for the second election in five years. But the 2009 election included even more “widespread fraud.”

In 2014 the election was even more deeply marred by fraud. To put a band-aid on the disaster, President Obama sent Secretary of State John Kerry to negotiate an extra-constitutional resolution that invented the position of “Chief Executive Officer” for Abdullah Abdulla. Failure to address systemic dysfunction in 2014 virtually assured political chaos we now have from the failed 2019 election.

There is no longer even a fig leaf of baseless hope to hide behind: the war will never be won with U.S. military forces and we should withdraw all combat troops in a methodical, professional manner. Not one more drop of American blood should be spilled in pursuit of the unattainable. We must end the war now.