An Agenda for the Trump-Putin Summit 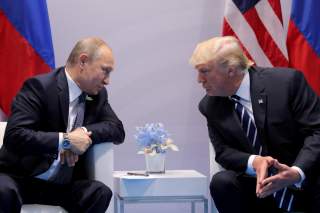 President Donald Trump will meet Russia’s Vladimir Putin next month in Helsinki, Finland. President Trump long sought this summit and talking is better than silence. However, without a change in U.S. policy it isn’t clear what positives will result.

Much of Washington has fixated on the Russian Federation as America’s most dangerous enemy. Democrats who dismissed Mitt Romney when he fingered Moscow in 2012 now treat the White House as Russian-occupied territory. Republicans outraged by any nation which resists U.S. authority see Putin as a leader of the global resistance. American policymakers bizarrely treat Russia as the threat it wishes to be.

The president should approach the summit with a realistic assessment of Moscow’s capabilities and intentions. Putin is no friend of Western-style liberalism, but then, many U.S. allies are no less authoritarian. There is no evidence that he bears any ideological animus toward America or Europe. KGB officers were among the most worldly and cynical Soviet officials. Although Putin regrets the geopolitical wreckage left by the USSR’s collapse, he has done little to recreate the Evil Empire. Retaking Crimea and gaining influence in Abkhazia, South Ossetia, and the Donbass don’t count for much.

Putin’s policies suggest that his ambitions are those of a modern-day czar. A globe-spanning empire is unrealistic and unnecessary. Instead, he insists on respect for his nation’s interests, expects secure borders, seeks to deter potential military threats, and desires to sit in global councils of power. Nothing suggests plans for aggression against Europe. And the Europeans don’t believe so either: even the countries squealing for U.S. troops spend barely two percent of GDP on their militaries, ludicrous levels if they really fear attack.

The United States might prefer the embarrassingly weak Russia of the 1990s, but it is gone forever. Moscow no longer is a superpower—it lacks the necessary population and economy. Russia is, however, capable of asserting itself, as evidenced by its confrontational policy toward Georgia and Ukraine. Yet even there the Putin government’s ambitions were limited: seize control of select territories and freeze conflicts to prevent the two nations’ admission to NATO. In this Putin’s behavior has been ugly but effective, and no worse than that of such U.S. allies as Saudi Arabia, which is waging a brutal and self-serving war, with American support, against Yemen.

While many in the West deride Moscow’s security fears, that perspective is easier to maintain with America’s history than Russia’s history. Add to that Washington’s widespread attempts at regime change, support for “color revolutions,” and calculated mendacity concerning NATO expansion: Russian skepticism of Western intentions is understandable. What Moscow views as offenses might not justify its actions, but its bill of particulars certainly helps explain Russia’s aggressiveness.

Relations, though bad, have not yet turned into another Cold War. To improve bilateral ties the two leaders should start by comparing national objectives. There are no essential conflicts. Even where the two governments appear at odds, such as over Syria and North Korea, the differences are manageable. Moscow wants in on the action and Washington cannot deny Russia a role.

Indeed, Syria demonstrates how U.S. policymakers too often succumb to the interventionist temptation, meddling around the world even when doing so is not in America’s interest. Moscow long allied with Damascus. A continuing Russian beachhead there does little to diminish Washington’s influence: after all, the United States is allied with Israel, the Gulf States, Jordan, Egypt, Turkey, and just about everyone else in the region. Washington policymakers simply want everything, but that is not always possible.

Presidents Trump and Putin also shared interests open for cooperation. Terrorism is one area. Perhaps Syria and North Korea if the United States is willing to share the stage. In fact, President Trump reportedly is interested in using the upcoming summit to make a deal on Syria that would allow a U.S. exit, a worthy objective. Perhaps there is an accord to strike on Iran, since Moscow appears interested in edging the latter out of Syria.

Even more important would be working together to constrain China, that is, moderate its ambitions and influence. The United States has needlessly pushed Moscow toward Beijing in a foolish though inadvertent reversal of President Richard Nixon’s geopolitical strategy. Tensions between China and Russia, the junior partner in any relationship, are evident. Moscow might prefer to look Westward, where its economic and territorial interests are less likely to be overwhelmed.

To forge a better relationship, Washington and Moscow need to work through the issues which most sharply divide them. Since Putin is unlikely to admit to interfering with America’s election, the two presidents should agree to stay out of each other’s internal affairs. In fact, the United States is a more active meddler than Russia—Washington has intervened in at least eighty-one elections worldwide, including the 1996 Russian contest. And that doesn’t include coups and other forms of coercion. Acknowledging its past misbehavior would give Washington greater credibility to complain in the future.

Any agreement should include a plan to fully staff the respective embassies. That is a necessary step toward normalization. It would encourage increased contacts and perhaps expand areas of cooperation.

Even more necessary is resolving the stand-off over Ukraine. Russia won’t yield Crimea absent a catastrophic military defeat, so on this issue the two governments should agree to disagree. The United States and Europe could formally refuse to recognize the annexation while effectively dropping the issue. Applying sanctions today is about like Mexican imposing an embargo on America as punishment for seizing half of Mexico in 1848.

As for Ukraine and Georgia, the Western allies should trade a commitment not to enlarge NATO with an end to Russian subversion of Ukraine. The Minsk accord offers a way forward, but has yet to be fully implemented by both sides. Georgia and Ukraine should remain militarily neutral while left free to go either way economically. Tbilisi and Kiev might not like this deal, but America’s and Europe’s top priority should be their own security. The unattainable perfect should not be the enemy of the possible good: reaching a modus vivendi to end the shooting and allow the countries under attack to move forward.

As with North Korea, the summit is proceeding backwards. Instead of detailed staff work to start, allowing the parties to forge serious agreements to be finalized when the principals confer, the presidents will meet, with something to follow. That something should be more than generic diplomatic boilerplate.

Nevertheless, the president’s willingness to meet with nations at odds with America deserves praise. He need not befriend foreign leaders. However, he should communicate with them. If nothing else, the president needs to ensure that both Americans and Russians better understand each other and the issues which unite as well as divide us.