From Airstrikes To Diplomacy: Disarmament and Nonproliferation Efforts 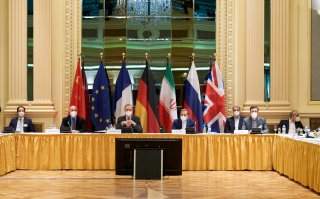 From cyber hacks to military actions that target nuclear programs, a number of tools are used in efforts to prevent countries from developing nuclear weapons. However, Dr. Målfrid Braut-Hegghammer says that these tactics often just “create unwanted attention and noise around a program” rather than actually succeeding in their goals.

Braut-Hegghammer’s extensive research on the 1981 Israeli attack on Iraq’s Osirak nuclear reactor led her to conclude that “what we do know about Israel's efforts to disrupt and halt Iraq’s nuclear weapons program shows that it's difficult to do, it takes a lot of different approaches and tools, and in a few cases, these efforts can actually dangerously backfire.”

After Israel destroyed Iraq’s Osirak nuclear research reactor, Braut-Hegghammer says that Iraq’s response “was an underground program with no limits in terms of resources.” Decades after the attack, it is clear that Israel’s use of military force only hardened Saddam Hussein’s resolve to build a nuclear program capable of producing weapons-grade uranium. The Iraqi program was eventually halted in the 1990s due to a myriad of factors, including sanctions, inspections, and conflict in the region during the Gulf war.

Looking at the current state of Iran’s nuclear program, some are already promoting military solutions to prevent Iran from developing enough fissile material to create a nuclear weapon. But, Braut-Hegghammer says, when comparing the desire to disrupt the nuclear programs in Iran and Iraq, “fundamentally the similar dilemmas and tradeoffs apply.” She adds that “one lesson that I think we sort of see play out a little bit is the skepticism against military force.” With ongoing diplomatic talks to save the Iran deal in process, and numerous security officials in both Israel and the United States arguing that diplomacy is the best path forward, in Iran’s case hopefully diplomacy wins out.

Turning to the bigger picture, Belcher asks Braut-Hegghammer about ongoing efforts to develop global nuclear nonproliferation solutions. One success is the Treaty on the Prohibition of Nuclear Weapons—known as the Ban Treaty—which prohibits nuclear weapon development, testing, and use, among other activities. Norway, Braut-Hegghammer’s home country, is demonstrating its interest in nonproliferation and disarmament by joining the first meeting of states party to the Ban Treaty as an observer in March 2022.

Braut-Hegghammer highlights that by doing this, Norway is signaling “concern about the state of the world when it comes to nuclear weapons, where the overall trend seems to be modernization and qualitative arms races, and not disarmament and nonproliferation.”

While Norway is unlikely to sign the treaty due to its membership in NATO—a military alliance with nuclear sharing—she sees Norway’s involvement as a sign that there is a “potential to bridge some of this rather polarized discussion we've seen between the pro-ban treaty advocates and others who are concerned with nuclear deterrence.” More specifically, she sees a space for conversations between nuclear weapons states and those that support the Ban Treaty when it comes to the humanitarian impact of nuclear weapons.

Braut-Hegghammer points out that the nine nuclear weapons states bring their own unique security concerns to the table. She highlights that historically, nuclear policy discourse came “through a U.S. perspective in one way or another.” However, she adds that “research and policy work these days … does reflect that we are now in a nuclear age where there are many different nuclear weapons states.” This diversity of perspectives is encouraging for her, as she believes that it “forces us … to see the world through a lot of different perspectives.”

This, in turn, “revitalizes discussions about deterrence, about nuclear policy, about these problems that we've been thinking about for a long time.” Braut-Hegghammer sees this as a necessity if we are going to move away from what she calls “a slightly static conversation” on nuclear weapons policy.

The full interview with Dr. Målfrid Braut-Hegghammer is available here. You can find her book Unclear Physics: Why Iraq and Libya Failed to Build Nuclear Weapons at Cornell University Press.