Is this Algeria's Arab Spring? 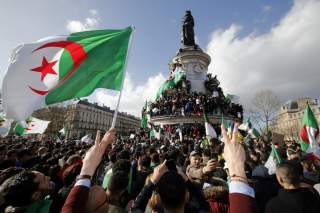 Algerians face an uncertain future as their president, Abdelaziz Bouteflika, abandoned his bid for a fifth term and postponed the April 18 election. He has also convened a national convention to meet at a later date to rewrite the constitution.

Bouteflika originally rose to fame for his role in ending the “Black Decade,” Algeria's civil war between Islamic extremists and the government. Seen as a national hero, he claimed the presidency.

Since public protests broke out on February 16 against Bouteflika’s bid to run for a fifth term, all eyes have been on the military, the most powerful institution of the Algerian state. Algerians are waiting to see if the military will back Bouteflika or the public.

Since Bouteflika’s stroke in 2013, a group of generals, politicians, and businessmen called “Le Pouvoir” have been the de facto leaders of Algeria. Bouteflika has had stable support from Le Pouvoir as the face of their regime and Algerians have generally tolerated the group; protestors have aimed their efforts at procuring concessions, rather than demanding regime change. The government successfully avoided large scale uprisings during the Arab Spring by expanding subsidies and creating extra public sector jobs. However, since oil prices have dipped from 2014’s price of $100 per barrel to a current below $70 a barrel, the regime lacks the resources to reprise that approach.

Additionally, the loss of popular support for Islamic political movements following the Black Decade and the fragmentation of other parties prevented an organized opposition from challenging the regime during the Arab Spring.

Despite Bouteflika's success in preserving stability throughout the Arab Spring, Gen. Ahmed Gaid Salah, the Army’s chief of staff, considered the second-most important man in the government, neglected to mention Bouteflika in two consecutive speeches. Rather, he stressed the bonds between the Algerian people and its military. On March 20, Salah visibly distanced himself from Bouteflika, praising the protestors’ "noble aims.” Nevertheless, his overall stance on Bouteflika’s incumbency remained unclear until March 26, when he called for the presidency to be vacated. Salah asked for the government to abide by Article 52 of the constitution, which states that the chairman of the Parliament’s Upper House, currently Abdelkader Bensalah, will serve as the interim president for at least forty-five days.

State television aired interviews of activists who are calling for Bouteflika to abstain from the election. Deputy Prime Minister Ramtane Lamamra, a potential presidential candidate, remarked on state radio that “the new system will be based on the will of the people.” This is a strong indicator that some state apparatuses guided by top officials amid the dispute are supportive of democratic reforms. Lamamra stated “Dialogue is our duty. Our top priority is to bring together all Algerians.”

Despite Salah’s stance, there are indications that the Algerian military is divided regarding Bouteflika’s successor, especially after the internal tensions followed the firing and imprisonment of five Algerian military officers in October 2018 on corruption charges. Although they were later released, their mistreatment angered military commanders, but it has also made them more cautious towards Bouteflika’s regime.

While the Algerian authorities justified the detentions as a campaign to purge corruption, analysts saw it as an attempt by Bouteflika or his supporters to eliminate his political opponents inside the military.

Algeria's unemployment rate reached 11.7 percent last September. The country has scored poorly in fighting corruption, ranking 105 of 180 on Transparency International’s Corruption Perceptions Index for 2018. Algeria has also been categorized as “Not Free” by Freedom House.

In its report, Freedom House stated that politics in Algeria are dominated by "a closed elite based in the military.” The report added that elections are distorted by fraud and lack transparency. A number of journalists and activists have expressed their concerns over the integrity of the election in the absence of any transparency.

If the Algerian state manages to hold elections, there are a number of possible successors to Bouteflika like General Salah. Salah is considered an important member of the old guard, whose policies ultimately led to high rates of unemployment, corruption, and a weakening of democracy. Salah represents a continuation of the status quo. In 2013, in order to prevent Algeria from slipping into turmoil, he backed Bouteflika when Trade Minister Noureddine Boukrouh called for a coup. His odds depend largely on the integrity of the election process and his interest in running. Salah is seventy-nine years old at present; it is possible that the same people who objected to the eighty-two-year-old incumbent would object to Salah’s presidency for the same reason.

The veteran Algerian diplomat Lakhdar Brahimi, a former foreign affairs minister who was the United Nations and Arab League Special Envoy to Syria until May 2014, could also be a candidate. Brahimi has a distinguished record, having served as the UN Special Representative to Afghanistan both during and after Taliban rule and as the UN Special Envoy to Iraq after the fall of Saddam Hussein.

Following the failure of former UN Secretary General Kofi Annan to reach a ceasefire in Syria, Brahimi was appointed as the Arab and UN envoy to Syria in August 2012. Although he was unable to stop the bloodshed in Syria, Brahimi’s international diplomatic roles earned him the respect of the Algerian people, and he was appointed to chair the national convention to rewrite the constitution proposed by President Abdelaziz Bouteflika.

The National Inclusive and Independent Conference is mandated to submit a constitutional draft that includes far-reaching reforms, primarily to create and codify a new election process. The document will be subject to a public referendum. Brahimi is expected to gain popularity as chair of the convention, which is intended to address the people’s demands.

The former minister of foreign affairs, Ramtane Lamamra, has also been suggested as a potential future leader due to his career as Algeria’s ambassador to the United States, Ethiopia, and Djibouti.

The new prime minister appointed on March 11, Noureddine Bedoui, is also touted as a possible successor to Bouteflika. Bedoui has served previously as deputy prime minister and interior minister.

The opposition still lacks consensus on a candidate for the presidential race against the old guard. However, many have chosen Mustapha Bouchachi, a renowned human rights activist, to represent the popular movement.

If Bouteflika dies or resigns before organizing the new elections, the Algerian constitution states that the parliament shall declare a state of incapacity of the President of the Republic and shall appoint the President of the Council of the Nation for a maximum period of forty-five days as the interim Head of State (i.e. what Gaid Salah called for).

If the state of incapacity continues beyond the period of forty-five days, it shall proceed to a declaration of vacancy caused by a legally mandated resignation and the president of the council of the nation shall assume the duties of Head of State for a maximum period of sixty days, during which presidential elections shall be organized, according to Articles 88 and 89 of the constitution.

With the elections postponed and the constitutional convention coming up, the procedures to declare candidacy have not yet been spelled out. Many believe that Bouteflika postponed the elections in order to stay in power.

However, demands for Bouteflika's departure are growing more popular. A new coalition called the National Coordination for Change is emerging from the largely fragmented opposition. Comprised of nine prominent opposition figures—including a human rights activist, a former Treasury Minister, and two renowned Islamic figures, among others—the group announced seven demands, including the dissolution of the government within parliament, the formation of the National Salvation Government, and, above all, the resignation of Bouteflika before April 27. The group also demanded a collective presidency composed of honest national figures willing to abdicate their powers at the end of the transitional period.

Throughout the Arab Spring, protests died down after the removal of the heads of state. This is a possibility for Algeria as well, but it is also possible that protestors—who saw many revolutions fail in the Arab Spring—will continue to demand the constitutional convention to reform the Algerian government on a fundamental level. For now, Algerians are waiting to see if Bouteflika steps down before a power vacuum opens on April 28, Bouteflika's last day in office.