America Is Determined to Fight the World 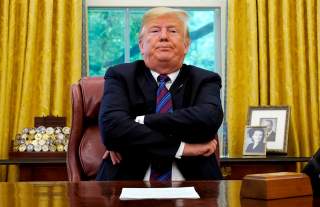 The United States sanctioned Beijing for purchasing Russian military equipment. Does the administration really believe that China will cancel the deal because of American economic pressure? Yet again Washington has deftly pushed the People’s Republic of China toward Russia, encouraging an unnatural friendship, even alliance.

America is the world’s strongest, most dominant nation. However, its power has become a problem. Hubris conquered Washington. Today the Trump administration appears determined to go to war, military, political, and/or economic, with virtually every other state.

Washington’s arrogance has been long building. During the Cold War the United States was necessarily constrained. Moscow could match U.S. military force, sported numerous allies in Europe and elsewhere, and challenged America ideologically. Although the Soviet Union was weaker than commonly believed—the CIA consistently overestimated the USSR’s economic strength—Moscow could counter the United States when important Soviet interests were involved.

In the 1950s the USSR’s influence was magnified by the People’s Republic of China, which overthrew the U.S.-backed Nationalist regime with Soviet support. Differences between the two communist giants eventually emerged, though there was disagreement in Washington over the degree of estrangement. President Richard Nixon recognized the opportunity to exploit their division, leading to his famed trip to Beijing. President Jimmy Carter shifted American recognition from the Republic of China, based on Taiwan, to the PRC. Commerce between the PRC and America expanded dramatically, creating a solid foundation for future cooperation.

Although Washington and Beijing were never military allies, their relationship appeared more secure and beneficial than that between America and Russia. The latter offered fewer economic gains but remained a significant military power. China and Russia were not particularly close—both had more at stake with America than each other. Europe was drawn closer to Russia because of propinquity, but the continent’s economic ties with the PRC grew steadily.

In recent years, however, the United States and its allies have adopted steadily more confrontational policies toward both nations. The Europeans hit Moscow with sanctions while Australia, Japan, the Philippines and other East Asian states enhanced their military strength and challenged China over its territorial claims. Washington took on both China and Europe. Moreover, Washington essentially acted as ringleader against both Beijing and Moscow, expanding alliances, pressing friendly states to do more militarily and impose tougher sanctions, and otherwise containing both adversaries’ geostrategic ambitions.

There is logic behind this strategy, but Washington does not appear to have considered the impact of pursuing these policies simultaneously. American policymakers are congenitally incapable of setting priorities.

For instance, the Trump administration is threatening to penalize India for purchasing Russian S-400 anti-aircraft missiles. New Delhi is an important counterweight to China and would not take kindly to such a step. Moreover, the president not only tore up the Iran nuclear deal, but threatened to penalize allied states which did not go along with its drive for something akin to regime change in Iran. This has pushed the Europeans toward both China and Russia, with plans to create an alternative to a U.S.-dominated financial system,

But the most dramatic impact on U.S. policy has been to consistently counteract the Nixon-Mao tectonic shift. No doubt, the dramatic transformation of the PRC, with a significant expansion of its power and reach, made some change in its relationship with the United States inevitable. However, the deterioration of ties with Russia has been far more dramatic. Putin is a bad actor, but Washington appears to have adopted a conscious policy turning Moscow into a replacement enemy for the Soviet Union.

Still, military sales are but a modest step. The two governments also have conducted joint military exercises. In September Moscow wrapped up its Vostok (“east”) exercise, Russia’s largest post-Cold War military maneuvers, which included 3200 Chinese troops. The maneuvers occurred in a region where the two states fought a brief undeclared border war a half century ago. Although the two governments did not name America, and termed the exercises defensive, "they feel they need to embrace to deal with the increasingly high pressure and containment from the U.S.,” opined Yue Gang, a military analyst formerly in the Chinese military. The maneuvers include an anti-access/area-denial component and seemed directed at Asian contingencies, though they also could be applied to Europe.

The two governments are sending a message. Observed Jeffrey Mankoff of the Center for Strategic and International Studies: “Russia is telling Beijing that China is not the focus of Russian planning in the Far East any more, and signaling to the United States and NATO that if the relationship stays bad, Russia has other options.”

Of course, Chinese and Russian cooperation is not unlimited. Russian General Leonid Ivashov (ret.) argued that “the maneuvers are aimed at deterring the aggressive intentions of the U.S. and NATO.” But this is not a military alliance, with the two governments prepared to challenge the United States for global dominance. Neither wants war with America, and certainly not on behalf of the other nation’s interests.

Still, the exercises will improve the combat proficiency of both nations. Beijing, which last fought a war four decades ago, has much to learn from Russia, which gained important experience in Syria. Indeed, without naming an antagonist the maneuvers address the possibility of military action by Washington. Said Michael Kofman of the Center for Naval Analyses: “the reality is that what they’re training and practicing against is still mostly an attack by the U.S.”

More serious, however, is a tighter relationship in the broader geopolitical realm. Officials in both nations speak of creating a “strategic partnership.” Argued Mark Simakovsky of the Atlantic Council: “clearly these two countries will continue to cooperate to subvert U.S. interests in Asia.” The Shanghai Cooperation Organization brings the two giants together with other Central Asian nations. Beijing and Moscow have initiated more than $100 billion worth of joint projects.

American officials dismiss the threat to the U.S. Argued Defense Secretary Jim Mattis: “I think that nations act out of their interests. I see little in the long term that aligns Russia and China.” And differences are significant. Reversing recent experience, China is now the senior partner. Russians worry about Chinese violations of intellectual property and geopolitical ambitions in the Far East, given the dramatic population disparity. Moscow also views Beijing as posing a threat in the Arctic. Because of its significant economic strength, the PRC is making significant inroads in Central Asia, which had been part of the Soviet Union.

More broadly, Russia identifies with Christendom. President Vladimir Putin has been using identification with Christian imagery and customs to his political advantage. In contrast, the Chinese leadership remains ruthlessly atheistic, hostile to the culture being promoted by Putin.

Nevertheless, Washington has inadvertently created a significant shared interest uniting China and Russia, fear of a common threat. The Trump administration’s national security strategy declared that both these nations were seeking to “shape a world antithetical to U.S. values and interests.” However, the most aggressive, unrelenting efforts to transform the world come from Washington. Despite the latter’s praise for “stability,” American policy has radically destabilized the Middle East, Central Asia, and Russian periphery.

Thus, for Moscow impeding if not halting the great new imperial power is important, sometimes even vital. Assumptions that Beijing and Moscow never can come seriously together are dangerous. Wilhelmine Germany took much the same view of the prospect of revolutionary France and Tsarist Russia joining together—which they did. Fear of Berlin drove the latter two into a strong alliance which ensured Germany’s defeat in World War I.

Confronting China and Russia together will grow tougher over time. Projecting power is expensive for Washington, while Moscow and Beijing are likely to improve their anti-access/area denial capabilities. It won’t be easy to convince the American people to pour ever more money into the military to contain nations which do not directly threaten America. The deficit will approach a trillion dollars this year and climb in the future, absent serious fiscal reform, which neither party supports. As the costs of entitlements explode, America’s retirees are unlikely to sacrifice their Social Security and Medicare benefits to protect wealthy allies.

This will force Washington policymakers to prioritize. The United States will have to decide which country poses the greater potential threat in the future. Surely that nation is China. Despite many uncertainties, including potentially significant demographic and economic challenges, the PRC is the superpower-in-waiting. Russia, in contrast, is in decline. Its economy is based on resources, its population is shrinking, its wealth dramatically lags behind that of Europe as well as America.

Most important, Moscow’s ambitions appear bounded: Russia today acts like a pre-1914 Great Power, demanding respect for its interests and security for its borders. Nothing suggests further aggression against its neighbors. For most of its recent history Crimea was part of Russia; backing Donbass separatists created a frozen conflict which prevents Ukraine from joining NATO; supporting formally independent Abkhazia and South Ossetia does much the same to Georgia, while providing payback to the United States for Kosovo. While unjustified, these are tactical maneuvers, not a plan for regional, let alone global, conquest.