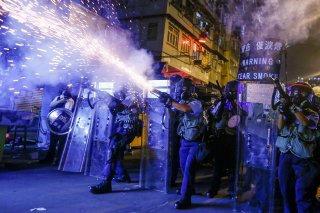 Beijing’s decision to bypass Hong Kong’s legislature and impose a national security law on the supposedly self-ruled territory has very serious implications. The change effectively negates Hong Kong’s autonomous status, which was supposed to last until 2047—50 years after Britain’s transfer of the territory to the People’s Republic of China (PRC).  Beijing’s move also is the latest manifestation of China’s ongoing regression into authoritarianism under President Xi Jinping.

PRC officials offer assurances that the security law is merely intended to deal with disruptive, pro-democracy demonstrations that have wracked Hong Kong since the spring of 2019. Foreign Minister Wang Yi stated that the law was aimed only at a “very narrow category of acts that seriously jeopardize national security,” such as “treason, secession, sedition or subversion.” It would, he emphasized, have “no impact on Hong Kong’s high degree of autonomy, the rights, and freedoms of Hong Kong residents, or the legitimate rights and interests of foreign investors in Hong Kong.” Of course, PRC officials would decide what constitutes treason, secession, sedition, subversion, or legitimate rights. The reality is that both political autonomy and freedom of expression in Hong Kong would be dead under the new security law.

U.S. leaders reacted quickly and harshly to Beijing’s plans. Within hours, Secretary of State Mike Pompeo condemned the proposal to “unilaterally and arbitrarily impose national security legislation” on Hong Kong.  He added that “the decision to bypass Hong Kong’s well-established legislative processes and ignore the will of the people of Hong Kong would be a death knell for the high degree of autonomy Beijing promised for Hong Kong under the Sino-British Joint Declaration, a UN-filed agreement.” American hostility was bipartisan in nature. Presumptive Democratic presidential nominee Joe Biden contended that the United States should lead the world in condemning China for undermining Hong Kong’s autonomy and freedoms.

In his initial comments, Pompeo strongly hinted that U.S. economic sanctions might be forthcoming, and it did not take him long to implement that implied threat. On May 27, Pompeo issued a report to Congress (required under the 2019 Hong Kong Human Rights and Democracy Act) declaring that Hong Kong no longer was autonomous. He stated that the national security law was “only the latest in a series of actions that fundamentally undermine Hong Kong’s autonomy and freedoms.” The Trump administration’s official view was that “the legislation means Hong Kong no longer merits special treatment” on trade and other matters.

If Hong Kong is treated as merely part of the PRC, the decision would have a dramatic impact on Hong Kong’s commerce with the United States—especially since Washington and Beijing are in the midst of an acrimonious trade war. But the Trump administration’s initial move may not be the extent of economic retaliation against Beijing.  Senator Chris Van Hollen (D-MD) and Pat Toomey (R-PA) are pushing bipartisan legislation that would impose sanctions targeting China’s banking sector—and indirectly targeting the PRC’s political and economic elite. Van Hollen stated bluntly that the measure was “designed to hit the Chinese Communist Party and the individuals involved in these decisions where it hurts.”

The desire of U.S. leaders and the American public to support the people of Hong Kong and punish the PRC is entirely understandable. Beijing’s troubling conduct on an array of other issues reinforces such a desire. The bilateral relationship with China already has deteriorated to an alarming extent because of animosity over several issues. Longstanding trade disputes have grown noticeably worse during the Trump years. U.S. complaints about Beijing’s duplicity and attempted blame-shifting regarding the coronavirus outbreak have soared, and the PRC’s defiant reaction has not helped matters.  The Xi regime’s bullying of Hong Kong may be the final factor pushing the United States into a full-blown cold war with China. Public opinion surveys suggest that Americans are willing to support a strong, confrontational stance toward China on policies across the board.

Nevertheless, it is important for Trump administration officials and congressional leaders to proceed cautiously. The relationship with China is important for a multitude of reasons. A cold war would have highly negative consequences for the already stressed global economy. Worse, the breakdown of ties would increase the danger of armed conflict regarding several issues, most notably the South China Sea and Taiwan. Such an outcome would be disastrous for both countries and world peace.

Americans wanting to express solidarity with Hong Kong also must face the reality that there is not much of substance the United States can do without incurring totally unacceptable risks. Washington is not going to deploy military forces off of Hong Kong or make similar reckless gestures. Imposing economic sanctions is likely to hurt Hong Kong as much or more than such measures injure the PRC elites.  Above all, U.S. rhetoric must not give the people of Hong Kong false expectations that Washington can and will prevent Beijing from imposing direct rule and squashing the territory’s desire for autonomy and democracy.  Fostering such hopes could encourage a resistance that leads to a Tiananmen Square-style calamity.

Exercising the necessary restraint will be hard. One important lesson U.S. officials and the American people need to take away from this episode is that at least as long as Xi Jinping remains in power, Beijing’s words, promises, and even official commitments cannot be trusted. American policymakers must remember that point whenever dealing with the PRC on any issue.