America Should Rethink Its Commitments to Allies 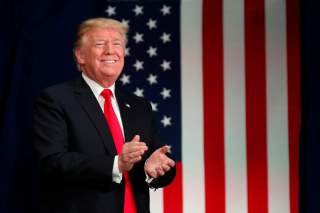 Washington’s demands toward North Korea and Iran have one important feature in common. In both cases, U.S. officials in multiple administrations have insisted that America’s adversary renounce any ambition to possess nuclear weapons or a significant ballistic missile capability. The underlying assumption is that if Tehran or Pyongyang possesses even a small nuclear arsenal, it would pose not only an unacceptable threat to regional peace but also a dire threat to America’s own security.

The worry about a menace to the U.S. homeland is improbable—unless Washington continues to put America’s safety and well-being at risk to defend vulnerable allies and security clients. That caveat underscores a crucial distinction between direct deterrence (deterring an attack on one’s own country) and extended deterrence (deterring an attack on a third party). The former has high credibility; the latter has significantly lower credibility.

The United States successfully deterred the Soviet Union during the Cold War, even though that country possessed thousands of nuclear weapons and sophisticated missiles to deliver them. U.S. leaders had confidence in the doctrine of mutual assured destruction—that Moscow would never attack the American homeland, knowing that a U.S. retaliatory strike would be so devastating as to eliminate the USSR as a functioning society. Washington warned the Kremlin that such retaliation would occur not only if Moscow launched an attack on America, but also if Soviet forces attacked Washington’s European allies or key U.S. security partners in East Asia.

Because the Cold War ended quietly, U.S. leaders concluded that extended deterrence had worked well and that it would have general applicability in a different era and under different circumstances. That may be a very faulty assumption. Although Kremlin officials apparently believed that the United States might risk even nuclear war to defend a major strategic and economic prize like Western Europe, they may have far greater doubts whether Washington would actually carry out a similar policy to shield small countries on Russia’s border. At a minimum, the danger of miscalculation is substantially greater.

Extended deterrence also entails elevated risks for the United States in its confrontations with North Korea and Iran. Although the evidence is not definitive, it is likely that Pyongyang already has a small nuclear arsenal, and the North Korean regime certainly has worked diligently to build a reliable missile delivery system. Iran’s program is not as advanced. Tehran has not conducted any nuclear tests (in contrast to North Korea’s multiple tests since 2006), and the multilateral Joint Comprehensive Plan of Action (JCPOA) which Tehran signed in 2015, put major limits on its nuclear program. Washington’s withdrawal from that agreement angered the Iranian government, yet it is only now that Tehran may have exceeded the limits the JCPOA set on uranium enrichment.

Washington clearly is worried about the nuclear ambitions of its two adversaries. Yet the chance that Pyongyang would launch a premeditated attack on the United States remains extremely remote—and will continue to do so even if North Korea’s nuclear arsenal expands. Several experts have noted that nuclear weapons may be the ultimate deterrent, but they are far less useful for intimidation, much less war fighting. Indeed, the latter applies only if a country’s political leadership is willing to commit national and personal suicide. There is no evidence that North Korea’s leaders fit that description, and the same is true of Iranian leaders. Even if Iran eventually builds a small nuclear arsenal, it is more likely for the purpose of deterring any forcible regime-change ambitions that Washington might harbor than waging a suicidal war by attacking the American homeland.

The risk factor rises, though, if the United States insists on continuing to shield allies and clients in East Asia and the Middle East. Given the political division of the Korean Peninsula and the tensions it has generated over the past seven decades, the danger of an armed conflict involving North Korea and its neighbors is ever present. America becoming entangled in such a conflict because of its security guarantees to Seoul and Tokyo is the one credible scenario that might culminate in a North Korean nuclear attack on the United States.

A similar risk is building in the Middle East, where the United States has foolishly injected itself into Iran’s quarrels with both Israel and key Arab powers such as Saudi Arabia. Again, the likelihood of even a nuclear-armed Iran launching an attack on the American homeland out of the blue is highly improbable. A war between Tehran and one or more of its adversaries that spirals out of control and snares the United States because of Washington’s implicit security commitments to Israel and/or Saudi Arabia is, unfortunately, a much greater danger.

U.S. leaders can retain a high level of confidence in the reliability of direct deterrence. But extended deterrence in both East Asia and the Middle East entails an already excessive—and rising—level of risk. Washington should inform its allies that it is no longer willing to incur that risk. Those allies would then need to decide whether to build their own modest nuclear deterrents as a more reliable insurance policy. (Indeed, one of the worst-kept secrets in international affairs is that Israel already has such an arsenal.) In short, the United States needs to off-load the risks to countries that have more direct interests at stake in deterring North Korea and Iran.