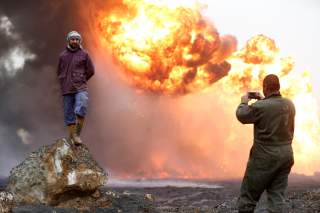 Secretary of State Mike Pompeo’s eight-day trip to the Middle East, which took him to Jordan and through the Gulf before concluding in Oman, was marketed by the Trump administration as a messaging tour. Coming weeks after President Donald Trump’s announcement that all U.S. troops will be leaving Syria in a matter of months, Pompeo spent the bulk of his regional tour impressing upon Arab rulers that Washington will remain an active player in the Middle East.

As is typical with many secretaries of state who deliver speeches in foreign lands, Pompeo’s remarks were full of the kinds of anecdotes and flowery rhetoric only a quintessential American exceptionalist could love. He talked about the United States as “a force for good” in the region, one willing and ready to stand by its partners during a time of crisis.

Rosy words of American do-gooderism, however, don’t tell us much of anything about whether the United States has learned the hard lessons that it needs to learn in order to avoid another decade of being entrapped in the Middle Eastern quicksand. In fact, from Pompeo’s words, Washington is not only failing to learn and adapt, but is dangerously close to repeating the same poor judgment. The American foreign-policy apparatus, articulated throughout Secretary Pompeo’s trip to the region, has completely misdiagnosed why the Middle East is such a violent, hyper-competitive, and dysfunctional place.

Pompeo may believe the source of the region’s problems lies in a lack of U.S. leadership and an aggressive Iranian adventurism, but he is wrong; if one needs an explanation about why the region’s politics are in such turmoil, then one need only look to the governments of the region to find the answer.

The Islamic Republic of Iran is, of course, one of those governments that has contributed to the region’s violent schizophrenia in a significant way. Tehran has proven itself to be a master manipulator, a country whose political and military leadership is expert at exploiting the geopolitical mistakes of its adversaries in order to press its advantage. As the Trump administration is fond of repeating, Iran remains the world’s largest state sponsor of terrorism, pouring cash and weapons into groups as varied as Hamas in the Gaza Strip, Hezbollah in Lebanon, and the Taliban in Afghanistan. The Islamic Revolutionary Guard Corps-Quds Force has its tentacles in many of the Middle East’s most intense conflicts, either ferrying support to its proxies to exhaust its regional competitors or—in the case of Syria—saving an allied regime from collapsing. Secretary Pompeo is so alarmed by Iran’s foreign policy that he and his colleagues from Europe, Asia, the Middle East, and Africa will meet in Poland on February 13–14 in part to discuss what strategies are most effective in changing Tehran’s behavior.

Iran, however, is not the only troublemaker in the region—nor is it the explicit source of all its problems. The reality is that while Iran has certainly done things the United States and many of its regional partners don’t like, other governments are not much better in fomenting stability in their own neighborhood.

Take Saudi Arabia. Traditionally, the Kingdom relied on a foreign policy of checkbook diplomacy, a strategy whereby Saudi officials would work behind the scenes and serve as the principle bankroller of proxies that would do its bidding. All of this changed as soon as Mohammed bin Salman, King Salman’s favorite son, ascended to the role of defense minister in 2015. A heartbeat away from assuming the throne, MbS has singlehandedly turned Saudi Arabia’s foreign policy into a bumbling series of self-inflicted wounds and botched interventions.

If Saudi Arabia was once assumed to be a paragon of Middle Eastern stability, Riyadh now represents the state that can’t shoot straight. From the kidnapping and forced resignation of Lebanon’s prime minister (since revoked) and the economic boycott of Qatar to the military campaign in Yemen—an indiscriminate, forty-two-month bombardment that has provided more space for jihadists to operate (not to mention creating what the United Nations refers to as the world’s worst humanitarian catastrophe)—Saudi Arabia under MbS’s reign is as much of a destabilizing influence as the mullahs who sit in Tehran.

The sectarianism that bubbled to the surface after the 2003 U.S. invasion of Iraq continues to plague the Middle East, with governments often tapping into it as a foreign-policy tool to burnish against their adversaries. With few exceptions, governance in the region is as ineffective as it has ever been. Political leaders in Baghdad, Tehran, Riyadh, and Cairo preside over large youth populations with few economic and social opportunities. Authority is maintained less by the consent of the people than by a vast network of intelligence officers and security forces.

Pompeo discussed some of these issues during his trip. But what he failed to communicate to his colleagues in the various Arab capitals was that as an outsider with very narrow national-security interests in the region, the United States neither has the patience, time, or frankly the ability to resolve any of this. There are no cookie-cutter “made-in-the-USA” solutions to what is ultimately a gloomy mountain only Arab politicians can scale.

In multiple Republican and Democratic administrations, U.S. officials believed that solutions to many of the region’s problems lied somewhere in the bowels of the State Department bureaucracy. If U.S. foreign-policy leaders looked hard enough, they would discover the magic formula that would make the Middle East a budding utopia of peace, tranquility, and democracy.

The last seventeen years of never-ending deployments involving hundreds of thousands of U.S. troops, trillions of dollars in taxpayer money were ordered, and missions of dubious importance with no clear end-game, is the best evidence there could be that this assumption was not only flatly wrong, but counterproductive.

The American people certainly think so. If a recent survey from the Charles Koch Institute is any indication, Americans no longer see the utility of maintaining U.S. troops in the region’s conflict zones just for the sake of maintaining them. They are increasingly disturbed by the notion that it is America’s responsibility to act as the Middle East’s guardian angel or that an American soldier from Bowling Green, Kentucky, should be ordered to sit in a small, exposed base along the Syria-Jordan border just because a group of Iranian-sponsored Shia militias may happen to be operating in the area. You can forgive Americans for being frustrated and increasingly discombobulated that this is the best justification the Beltway can conjure up.

In between the handshakes, speeches, and photo opportunities, Secretary Pompeo missed a golden opportunity to send the tough message to Arab leaders the administration needed to send: while the United States will continue to be a player in the region, it will do so only to ensure that its own national-security interests are protected and defended. And those interests are relatively few: protect the homeland from terrorism; prevent a hegemonic power from dominating the region’s politics; and keeping oil markets stable for the American consumer. When the interests of other states correspondent to American goals, Washington will not hesitate to enter into pragmatic and flexible arrangements. But when they don’t, Arab leaders should not assume blanket and unconditional U.S. support.

Coincidentally, this is a frame perfectly in tune with President Trump’s own sensibilities. It’s time for the president’s own national-security aides to catch up with him.