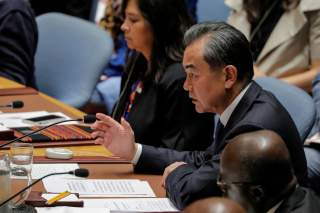 The U.S. withdrawal from the Iran deal, and subsequent escalation of tensions between Washington and Tehran presents immediate challenges for China: higher prices for the world’s largest oil importer, a potential conflict along a key juncture in the Belt and Road Initiative, and heightened risk of nuclear proliferation. Chinese Middle East experts have also raised concerns that overly constrictive U.S. pressure could sideline moderate elements in Tehran, and drive Iran to “adopt a more radical foreign policy” (采取更激进的外交政策), which would further intensify sectarianism and extremism across an already volatile region.

One day after President Donald Trump announced the Iran Deal withdrawal, an editorial in the Communist Party’s largest official newspaper, the People’s Daily, highlighted a more general Chinese concern that the move heralds a United States shift away from multilateralism towards a more unilateral foreign policy. The editorial appeared under a recurring pen-name “Zhong Sheng” (“voice of China” 钟声) that is used to put forth “quasi-authoritative” positions on key policy issues. The piece castigates the United States for its “Reckless Disregard of International Responsibilities” (无视国际责任的轻率之举). The essay observes that by pulling out of the deal, “the US government ignored widespread opposition from the international community” (美国政府无视国际社会的普遍反对) and intensive lobbying from traditional allies. According to “Zhong Sheng,” this willingness to go it alone indicates that U.S. foreign policy is moving “further and further away from multilateralism” (多边主义越来越远).

Chinese foreign policy has long sought to facilitate the emergence of a multipolar world. In his 2017 address to the 19th Party Congress, General Secretary Xi Jinping observed that the international system has become more favorable to China as “trends of global multipolarity” are “surging forward.”

Beijing’s push for multipolarity is part of a broader effort to erode U.S. primacy. As Robert Blackwill noted, Beijing’s pursuit of “power in all dimensions” is “driven by the conviction that China, a great civilization undone by the hostility of others, could never attain its destiny unless it amassed the power necessary to ward off the hostility of those opposed to this quest.” In order to achieve this goal, China works to build up its own national power, but also seeks to promote the emergence of other poles to counterbalance the United States (Russia, India and Europe). Contrary to some assertions, this not because Beijing seeks to “rule the world,” by supplanting the United States’ top spot in the international order (on the contrary, Beijing has demonstrated minimal interest in shouldering the burdens of global leadership). Rather, it is because China sees the United States as the main obstacle to its primary foreign-policy goal, which is to return to its historical position as the dominant power in Asia. Xi made this clear in his speech when he proclaimed that “the Chinese nation now stands tall and firm in the east.”

The emergence of a truly multipolar world order, divided into spheres of influence, would allow China to dominate its East Asian regional environment, and restore what it views as its civilizational birthright as the central country in Asia. Although the world is increasingly multipolar, much of the hardwiring of international system remains under U.S. preponderance (consider the dollar’s continued dominance of international finance; more on this later). One impediment to the emergence of a multipolar world order, is the stubborn persistence of Transatlantic unity, which has prevented the emergence of the European Union (EU) as an alternate, independent pole to U.S. power. As Robert Ross, et al, observe, a more independent European foreign policy would “allow China to capitalize on the emergence of an additional pole in the international system and attempt to play the US and Europe off against each other”.

In contrast to Western elites’ alarm over the perceived erosion of global governance systems and the liberal international order in the Trump era, China’s anxiety about a United States that is more nationalistic and prepared to act unilaterally is not primarily normative, but self-interested. Although it would likely become increasingly isolated over time, an America unbound from the constraints of multilateral organizations, pursuing a unilateral foreign policy based on a narrow, transactional conception of its national interests will be a profound challenge to China in the short to medium term. For example, China is already feeling the pinch of U.S. tariffs (Section 301) that the Trump administration has unilaterally imposed outside the framework of the World Trade Organization. Another concern for Beijing is the United States’ ability to inflict economic pain on its adversaries through unilateral sanctions. As Andrew Small of the German Marshall Fund observes, “Beijing has long been keen to see an erosion of U.S. capacity to impose sanctions unilaterally, particularly the sophisticated toolkit that the U.S. Treasury has developed over the last decade.” The recent sanctions that the U.S. Treasury has placed on Chinese enterprises that do business with North Korea and Russia, demonstrate that China is not immune from being a target of U.S. sanctions.

Iran is a Transatlantic Wedge

Some have suggested that U.S.-Europe trade disputes would become a potential Transtatlantic wedge that Beijing could exploit. However, shared U.S. and European grievances towards China’s trade and industrial policies clearly outweigh U.S.-EU differences on trade. This was evidenced this summer, when the United States doubled down on its trade conflict with China by imposing billions of dollars in new tariffs, while at the same time Trump and European Commission chief Jean-Claude Juncker achieved a modus vivendi to “work together toward zero tariffs, zero non-tariff barriers, and zero subsidies on non-auto industrial goods.”

Iran is another matter entirely. Ultimately, the Europeans blame the Trump administration for taking a maximalist approach that sidelines diplomacy in favor of confrontation, a sentiment on full display at this year’s UN General Assembly. French president Emmanuel Macron repudiated Trump’s bellicose speech saying that sanctions and containment are insufficient, “we need to have the space for new negotiations,” and declaiming that “the serious crisis of confidence was opened by the imposition of extraterritorial sanctions by the United States, but Tehran keeps abiding by its nuclear obligation.” At the UN Security Council meeting on nonproliferation, UK Prime Minister Theresa May directly contradicted the Trump administration’s position on Iran, arguing that the JCPOA is the best chance to prevent Iran from acquiring nuclear weapons.

China (and Russia) stand to accrue a more immediate practical benefit from the U.S.-Europe Iran rift: the weakening of the United States’ ability to unilaterally impose sanctions. China and the other Iran Deal signatories, the UK, Germany, France and Russia, recently set up a special payments system, which would provide an alternate channel to SWIFT, the primary network for international payments. Although SWIFT is based in Europe, it is beholden to U.S. regulations because of the large number of dollar-denominated transactions it processes. This alternate special-purpose vehicle, which would not involve commercial banks exposed to the U.S. dollar and hence be shielded from potential U.S. retribution, would function as something of a “clearing house” that connected the “Europeans and Iranians as they try to do business.” This demonstrates that the United States’ Iran policy has created an opportunity for China to work with the European powers to begin to slowly chip away at a key lever of UF.S. power—the dollar’s dominant position in the international financial system. Cooperating with Europe enhances China’s efforts to accelerate “de-dollarization” because the Euro is the only currency that is anywhere remotely as internationalized as the dollar. Per SWIFT, as of December 2017, the dollar was used in around 41 percent of international payments, the Euro in 39.45 percent and the RMB in merely 1 percent of transactions.

Of course Iran hawks will respond by decrying that the world does not adequately grasp the dangers posed by Iran. But they cannot deny the reality that most of the United States’ longstanding allies (the UK, France, and Germany) and partners (India) are deeply uncomfortable with the U.S. pressure campaign on Iran. In fact, these allies are so frustrated that they are willing to work with U.S. competitors to blunt Washington’s ability to levy sanctions on its adversaries. With this in mind, the Trump administration needs to undertake a cost benefit analysis on its Iran policy that addresses the following questions. Is it really worth making Iran, a middle power by all accounts, the centerpiece of U.S. foreign policy, especially when this administration has sought to reorient U.S. foreign policy around major power competition? Is it worth alienating longtime allies to take a maximalist approach to Iran? Is it worth imperiling the dollar’s dominance of the international financial system, which hitherto has been a key source of U.S. foreign-policy leverage? If the United States does finds itself in a more serious major-power confrontation with China (for example over Taiwan), or Russia (over Ukraine), then Washington may come to regret that its unilateral approach to Iran alienated allies and eroded a key economic instrument of U.S. power.