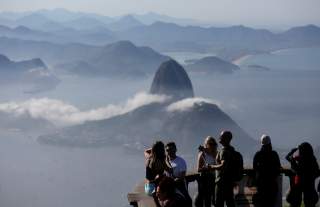 The Trump administration, like its predecessors, has attempted to free Americans held by foreign governments and groups. President Barack Obama essentially arranged a swap to bring home U.S. citizens imprisoned in Iran. President Ronald Reagan famously sent arms to Tehran in an attempt to free Americans kidnapped in Lebanon.

Although President Donald Trump has not articulated his view of the issue, the Wall Street Journal’s William McGurn argued: “If America First means anything, surely it means a recognition that insisting on consequences for anyone who harms an innocent American abroad isn’t an act of charity.”

That’s an appealing policy for someone who frequently travels overseas, and not always to garden spots—Afghanistan, Iraq, Kosovo, Burma, Bangladesh, Pakistan, Indonesia, Kurdistan, Lebanon, Jordan, North Korea, Sudan, Nigeria, Zimbabwe and Egypt, among others. I’d like the 101st Airborne to come rescue me if necessary. But that actually would be bad policy for the United States.

So far the Trump administration’s only success is with the Democratic People’s Republic of Korea. The North apparently wanted to return Warmbier when it became evident that his health was failing. Three other imprisoned Americans were released as part of negotiations leading up to the June summit.

In contrast, by killing the nuclear deal, declaring economic war on Tehran, and aligning with the even more repressive Saudis, the president has left Americans held in Iran in a much more precarious situation. Even the Rouhani government, which does not control the security forces, has no reason to do President Trump any favors.

As for Andrew Brunson, the Trump administration made it much more difficult for Turkey to release the American pastor irrespective of its private inclinations. Making a public demand for his release and applying sanctions against Turkish officials probably strengthened the president’s support among evangelicals. However, the U.S. actions forced the Erdogan government to retaliate to satisfy popular nationalist sentiments.

Yes, we know the claims against him are nonsense and Brunson is a political hostage. But Ankara says otherwise. In fact, tens of thousands of Turks have been arrested or lost their jobs for even less. And enough Turks believe their government to continue to reelect it. The regime can’t afford to cave to Washington, which supposedly is in league with Ankara’s enemies. How the issue gets resolved is anyone’s guess.

Indeed, flip the situation around. No American president could easily give in to a foreign government demanding that he ignore the law and evidence and release someone who had been charged with terrorist offenses. Imagine how a candidate like Donald Trump would make that an issue!

Ultimately, Americans travel the world at their own risk. And the dangers grow substantially when one leaves the three or four dozen nations that are wealthy, democratic and law-abiding. The potential for harm jumps much higher still in hostile states and conflict zones. U.S. citizens should be free to go where they want, but they shouldn’t expect to be exempt from local laws and realities.

The potential problems are many. One is dealing with unfair, corrupt and awful criminal justice systems. Think Billy Hayes of Midnight Express fame, who escaped from Turkish prison after being sentenced to life for smuggling hash. There’s not much Washington can do in such cases, even if the American vehemently proclaims his innocence. The United States doesn’t excuse foreigners from the law or give them special consideration.

Then there is transgressing local laws and norms that differ radically from those maintained in America. Insulting the supreme leader or evangelizing might result in prison in North Korea. Insulting the Prophet Mohammed in Pakistan might result in prison or death, including by mob. Smuggling drugs might result in execution in Indonesia. Yes, these consequences are outrageous. But such measures are not targeted against Americans. And the U.S. can’t do much more than plead for mercy since it also asserts the right to make its own laws.

Worse are cases like Iran and Turkey, where the arrests look political. Often the injustice is clear even if it is not acknowledged. Almost certainly those imprisoned are innocent—for instance, no one who knows Brunson credits the idea that he is a CIA operative working with Muslim cleric Fethullah Gulen. Even so, he and other Americans chose to put themselves under the power of governments not known for their impartiality and commitment to the rule of law. These regimes almost always treat their own citizens even worse, filling jails with critics and opponents as well as the powerless and unlucky.

Finally, everywhere, especially in lawless states and war zones, Americans are at special risk of kidnapping given Washington’s global role. The United States can attempt a rescue, but that usually requires good intelligence and local cooperation. In contrast, the U.S. government refuses to pay ransoms, lest it encourage increased attacks by putting a price on the heads of Americans. Blowing up countries, like Iraq and Libya, has only worsened this problem.

Americans so treated don’t deserve their fate. But their choice of travel destination created a risk that in many cases was foreseeable, however small it might have seemed at the time. And America’s ability to intervene on their behalf almost always is limited.

While U.S. officials can urge due process, apply diplomatic pressure, and consider small-scale trades, it isn’t right to hold national policy hostage because of the mistakes made by an American citizen. Should Washington disrupt economic relations with an important trading partner? Force other U.S. citizens to contribute to ransom a victim? Grab a hostage or two from the offending country? Threaten war?

McGurn warns against “abandoning a fellow American held overseas to the tender mercies of some thug government.” But it matters who and why. Military members and diplomatic personnel acting on behalf of the U.S. government are owed a unique duty. Adventure tourists wandering through insurgent-held territory, not so much.

Even then, of course, he or she shouldn’t be forgotten. However, what to do must be a matter of balance. There is a difference between “abandoning” someone and refusing to sacrifice important interests of other Americans and the nation as a whole to rescue them. Especially when the wrong kind of action might increase the danger for other U.S. citizens visiting or residing in other countries.

Liberty requires responsibility. Americans should be free to travel wherever they want, even North Korea, the only nation now off-limits to Americans, courtesy the Trump administration. But when doing so they should have no illusions about Uncle Sam riding to the rescue if they get into trouble. Washington should do its best to protect Americans, even when they act beyond its jurisdiction. However, they should not expect to be rescued form their own folly.

Image: Tourists are seen with the Sugarloaf Mountain in the background in Rio de Janeiro, Brazil June 21, 2018. REUTERS/Bruno Kelly