Are Iran and the United States Gearing Up For a Coronavirus Prisoner Exchange? 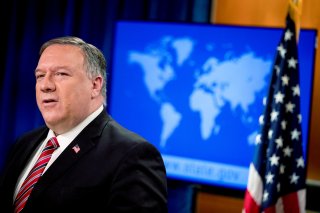 The two officials discussed the repatriation process on Monday, according to the U.S. State Department. Iranian officials have increasingly talked about the impending release of Sirous Asgari, an Iranian academic in U.S. immigration detention, and linked his case to that of Michael White, an American held for insulting Iran’s leaders since 2018. But the Trump administration has sent contradictory signals about whether it is interested in a prisoner swap.

Asgari and White have both contracted the coronavirus in detention, although White has recovered. White, a cancer survivor, has been temporarily released to the Swiss Embassy as part of a coronavirus-related mass furlough of Iranian prisoners.

The New York Times first reported last week that the two sides were negotiating a prisoner swap, with Iranian diplomat Abolfaz Mehrabadi claiming that White’s case is “entangled” with the fate of Asgari and an unnamed Iranian-American doctor.

U.S. and Iranian officials confirmed to Reuters that Asgari is likely to be deported soon, Iranian foreign minister Javad Zarif told reporters on the sidelines of a Monday cabinet meeting that Asgari “will return to the country” on the next flight.

Asgari’s return could be an opening for Iran to release White. But a U.S. immigration official called Zarif’s story “B.S.,” casting doubt on whether an exchange of prisoners could take place.

“You SAY you want all of your citizens back. I call B.S.,” wrote Ken Cuccinelli, acting head of U.S. Citizenship and Immigration Services, in a Monday social media post. “We have 11 of your citizens who are illegal aliens who we have been trying to return to your country. You suddenly SAY you want them back, so how about you send a charter plane over and we’ll return all 11 at once?”

Asgari arrived in the United States in 2017 and was arrested for violating U.S. economic sanctions on Iran during a previous stint at a U.S. university, but a federal judge dismissed his case in November 2019.

Asgari offered to buy his own return ticket to Iran, but U.S. Immigration and Customs Enforcement has detained him since the trial. Asgari was flown back and forth to different detention centers in March as the coronavirus pandemic disrupted global air traffic and delayed his deportation.

White was arrested in 2018 during a trip to Iran that his family says was to meet a woman he had fallen in love with. He was convicted in 2019 of insulting Iran’s leaders and unspecified “privacy violations” and sentenced to ten years in prison.

The release of White and Asgari would be the second U.S.-Iranian prisoner swap in recent months.

The New Yorker reported that former U.S. officials and private citizens had done most of the work towards Wang’s release against resistance from Trump administration officials.

The family of Robert Levinson, a former FBI agent who disappeared in Iran in 2007, recently claimed that he had died in Iranian custody. It was reported that the information came from the Iranian foreign ministry.

The State Department has declined to provide the full count of Americans it believes are wrongfully detained in Iran, citing “privacy and security considerations of ongoing cases.”