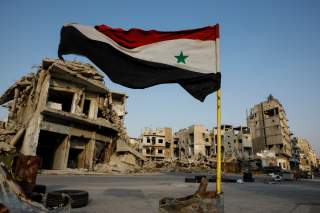 For the Syrian people, the last eight years have been excruciating. Hundreds of thousands of their fellow countrymen have perished in a civil war where being merciless is the rule rather than the exception. Tens of thousands of additional Syrians have been swept up by the Assad regime’s vast intelligence apparatus and detained in extraordinarily inhumane conditions. Syria’s economic productivity has plummeted; a once proud nation that served as the beating heart of Arabism now lies in ruins, its future dictated by foreigners. Estimates of the cost for reconstruction are as high as $400 billion, a price tag Syria won’t be able to afford for perhaps as long as a generation.

Bashar al-Assad is only one villain in this tragic story, but he is by far the biggest one. With the notable exceptions of Egypt, Iraq, Lebanon and Algeria, the Arab world has blamed Assad for destroying his country in order to save himself. In November 2011, when Syria’s violence was only eight months old, the Arab League voted to suspend the Assad regime’s membership—only the third time in the League’s history that the group suspended one of its members (the first occurred in 1979, when Egypt was iced out after Egyptian president Anwar Sadat signed a peace treaty with Israel). Weeks later, the Arab League placed economic sanctions on Syria, cutting off commercial trade with Damascus and restricting the travel of senior Syrian officials.

Nearly eight full years of war, however, have significantly changed the Arab world’s perception of the Assad regime. Years earlier, Saudi Arabia, Turkey and Qatar were sending weapons to multiple Syrian rebel groups for the express purpose of bloodying Assad’s nose and pushing the Syrian dictator to the peace table. That support, however, paled in comparison to what Russia and Iran offered to the Syrian government; Assad’s forces (backstopped by Iranian-organized foreign Shia fighters) have been retaking territory from the very moment the Russian Air Force entered the war in 2015. If it weren’t for a last-minute deal hashed out last month between Russia and Turkey, which stabilized the front lines outside Idlib, the armed opposition would be in an even weaker position.

While many Arab leaders would have loved to oust Assad and hand Iran a major strategic setback, all are now of the mindset that the Syrian dictator isn’t going anywhere. During the moribund UN peace talks last year, the Saudis reportedly pressed the opposition delegation to be more realistic in what they could achieve: to Riyadh, an Assad-free Syria was no longer a possibility. Assad’s opponents in the Persian Gulf have seen the handwriting on the wall for a while, and the message was that the Assad regime has largely snuffed out all attempts to usher in a post-Assad Syria.

The same Arab powers that once aided the anti-Assad rebellion with cash, ammunition, political support and weapons are now coming around to normalizing their relationship with Damascus. The motto appears to be “if you can’t beat him, join him.”

The Syrian foreign minister, reviled as a delusional pariah and chief representative to a criminal regime, is now meeting some of his colleagues again. Business as usual is slowly becoming standard. During the United Nations General Assembly, he greeted his Bahraini colleague with a warm embrace, something that would have been inconceivable years earlier. Syrian officials are now in talks with Baghdad to reopen the main Albu Kamal border crossing between the two nations. The Iraqis, never particularly supportive of the anti-Assad rebellion to begin with, are discussing Syria in terms of reconciling it with the rest of the Arab world. After a meeting in Damascus last week, Iraqi foreign minister Ibrahim al-Jaafari all but pleaded for the region to end its isolation of the Assad government and offer the Syrian dictator an olive branch. “No one can marginalize Syria,” Jaafari said, “and I raised the necessity of its return to the Arab League.”

Bashar al-Assad told a Kuwaiti newspaper earlier this month that there is “a major understanding” between himself and his fellow Arab leaders. Apparently, this understanding includes moves towards economic normalization. The Kingdom of Jordan, once the hub of a CIA-run operations room against the Assad regime, recently opened up its joint border at the Naseeb crossing to trade and travel. The Israelis, meanwhile, have taken a pragmatic approach; Assad may be a tyrant and a mass murderer, but he’s the devil we have been dealing with for decades and his family has kept the Golan Heights frontier quiet since the 1973 Arab-Israeli war.

To the opposition, the very thought of Bashar al-Assad being re-inducted into the Arab world as a legitimate participant is both depressing and nauseating. How can a man who has butchered, tortured, gassed and starved his own people possibly be given such a status? How is it possible for Arab leaders to improve relations with a despot who has killed so many Arabs himself?

The answers are simple: realpolitik and exhaustion. Arab states are tired of hosting and caring for millions of Syrian refugees, tired of the spillover violence, tired of the terrorist groups that have exploited Syria’s civil war in order to expand and tired of losing the trade routes Syria provided to the Persian Gulf. Like many Syrians who just want to rebuild their lives, the Arab world is tired of the war.

It may take a while before political relations between Syria and its neighbors are fully reestablished. But events are on the path towards an eventual rapprochement. In the interim, Assad will be content with a partial reconciliation from an era of isolation.