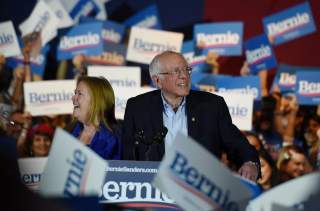 Every candidate for President of the United States gets the inevitable “when will you use military force?” question. Of course, every candidate should; those auditioning to become the next commander in chief of the U.S. armed forces will have immense power at his or her disposal to deploy U.S. troops, launch a missile strike, and freeze diplomatic relations with another country (if America’s system of government actually abided by what’s codified in the U.S. Constitution, presidents would have much less authority on war and peace than they currently exercise). There is no position on the planet that is as lonely, serious, and psychologically straining as president, where you have to make the final decision and ultimately live with the consequences.

Sen. Bernie Sanders, the presumptive Democratic presidential frontrunner post-Nevada, received this question from Anderson Cooper during a 60 Minutes interview on Sunday, February 24. Sanders largely kept to the script, saying that he would authorize the use of U.S. military force if the security of the American people was threatened or if Washington’s allies were under threat of attack.

He’s hardly the only candidate who has been faced with this query. Bill Clinton’s 1991-1992 presidential campaign was consistently enveloped with doubts about whether the anti-Vietnam war activists had the stomach to make the difficult decisions. So too was Barack Obama, who entered the 2007-2008 campaign with a short stint on the Senate Foreign Relations Committee as the only foreign policy item on his resume. Donald Trump didn’t have any foreign policy experience at all when he entered the race in 2015.

Nonetheless, all of these public figures eventually delivered long-winded speeches detailing the circumstances in which they would leverage U.S. military power around the world. George W. Bush talked about downsizing the U.S. military role in peacekeeping and policing operations in the Balkans and focusing more of the Pentagon’s attention on conventional conflict with nation-states. Obama promised to end the U.S. military occupation in Iraq as soon as possible and redeploy more troops, intelligence assets, and dollars to the war against Al-Qaeda and the Taliban in Afghanistan. Trump committed his administration to extricating the United States from wars that were black-holes for American blood and treasure and bombing the Islamic State into extinction.

Yet what if we have been focusing too much on the wrong question? Understanding when a potential president will engage in armed hostilities is certainly an important component of the debate. But it shouldn’t be treated as the only line separating those who qualify for the job from those who don’t. To treat it as such is to suggest that candidates can only be considered presidential material if they take the most hawkish position possible.

National security policy is about much more than when and where to drop bombs. The mainstream commentariat has an unhelpful habit of drilling down on this subject to the exclusion of all others. And if other questions are asked during a debate—would you meet with Leader X directly; would you get return to this or that agreement—they are given not nearly the same amount of attention.

Being president is just as much about bold diplomatic initiatives as it is about green-lighting a daring special forces raid or authorizing a military operation. It’s also about having the judgment to do what can often be the unpopular thing in Washington, D.C. by stepping back and deescalating from a looming crisis. Choosing restraint and opting for diplomatic measures takes just as much strength, perseverance, and leadership as making the gut-wrenching decision to plunge the United States from peacetime to wartime.

Presidents must also demonstrate a willingness to prioritize and execute on it. Administrations of both parties have learned the hard way that doing too much or taking the lead on problems that have little to no impact on U.S. national security one way or the other is like gulping down a poisonous cocktail. It leaves the United States exposed to mission-creep, overextension, needless loss in lives and taxpayer money, captive to unattainable objectives, and vulnerable to the machinations of minor powers. Those who have the foresight to distinguish between what is truly vital to preserving Washington’s political and economic interests from those that don’t have a half-way decent shot at managing the United States in a world infested with problem-children and opportunists.

Presidential candidates like to talk tough on the campaign trail in order to persuade the American public that they can answer that 3 a.m. phone-call without skipping a beat. It’s time for all of us, journalists, pundits, analysts, and ex-officials, to begin viewing the 3 a.m. call through a wider scope.