This Is the Big Moment for John Bolton 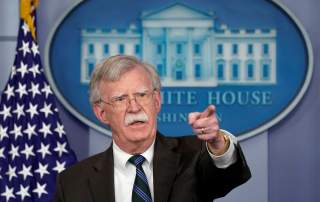 “By the way John and I agree on all of this,” President Donald Trump told reporters Wednesday in Iraq during his surprise visit, in reference to his relationship with his hawkish national security advisor, John R. Bolton.

Trump had, minutes before, regaled journalists with his thought process on the Syria move, telling those gathered that he had granted Pentagon brass numerous extensions. But for the president—nearly two years in—it had been enough. The Islamic State had been all but extinguished.

But Bolton—only months ago—had said the purpose of sustained U.S. deployment in war-ravaged Syria wasn’t so much the continued banishment of ISIS, as it was the containment of rising regional power Iran (the enemy of the Islamic State).

“We’re not going to leave as long as Iranian troops are outside Iranian borders and that includes Iranian proxies and militias,” Bolton said in September, meaning for the National Security Council head, the terms were the departure, at the very least, of Lebanese Hezbollah and Iranian forces. Bashar al-Assad, the head of Syria’s government, could also be interpreted as an Iranian “proxy.”

So, Bolton sat pensively Wednesday in the press room at Al-Asad (no relation) Air Base, as the president detailed a plan for a snap pull-out that anyone familiar with Bolton’s decades of public statements knows he could not possibly favor.

But at least he sat there.

Proximity is power, especially with this president. Mike Pompeo, as CIA director, greased the wheels for his ascension to Foggy Bottom by making a point of routinely, personally delivering Trump his daily intelligence brief (as well as not-so-subtly contrasting himself with his doomed predecessor, Rex W. Tillerson, whenever he got the chance).

In contrast, James Mattis, the now-fired Defense secretary, fell out of the inner circle early this year and never recovered. By the time Mattis, this past summer, failed to accompany Trump, as Bolton and Pompeo did, to his landmark Singapore summit with the North Korean strongman Kim Jong Un, he was a marked man, though he retained hero status within the establishment in Washington.

Bolton now faces a fundamental choice. He serves a president whose public statements on foreign affairs are a hornet’s nest of potentially contradictory impulses. Just Wednesday, Trump said: “By the way, I think I am probably more hawkish than anybody. Nobody’s more hawkish than me.” And then he proceeded to lay out his Rooseveltian, walk-softly-but-carry-a-big-stick rationale for pullouts in Syria, and perhaps Afghanistan and beyond.

Bolton has always been mistaken for a neoconservative, but is not one. He pooh-poohs the central neocon creed—democracy promotion—and is a more loyal right-winger (evidenced by his service to Trump). He told the Financial Times in 2007 he self-identifies as a libertarian (much to the horror of the foreign policy restrainer crowd). But here is another break with the neocons, who have always been more ambivalent about laissez-faire capitalism (“two cheers”).

Bolton is a nationalist uber-hawk. Trump is a nationalist, certainly, but he is not, despite his protestations, an uber-hawk as generally conceived. He has broken ranks with the hawks too many times, on innumerable matters, dating back to Iraq. The question now for Bolton: is this worth it? Does he value power over “principle”?

The early evidence is yes, as shown by the presser Wednesday. Mattis, Bolton’s rival, has quit in protest, the pullout and purported abandonment of the Kurds in Syria too much to countenance. This might not be the John Bolton presidency, but Trump shows no signs of stymieing his freelancing: a China-focused, hawkish Africa policy, proclaiming a “troika of tyranny” in Latin America and ratcheting up an ever harder line against the clerical government in Iran. His ability to knife-fight bureaucratically and work within political reality is what separates him from retired Lieutenant Colonel Ralph Peters, who has since resigned from Fox News and the GOP in protest of its neo-Buchananite turn.

Bolton actually governs, even if he doesn’t always win. And he will continue to do so, as long as he doesn’t fall from Trump’s favor. Next year could provide him with some early victories. A source familiar with the matter tells me he’s poised to install his loyal former deputy, Mira Ricardel, in the newly Mattis-less Pentagon. Ricardel has long sought a major Defense post, and served on Bolton’s NSC for a time this year, only to be bizarrely ousted from the White House at the behest of the first lady.

Bolton plays for keeps. Which is why those who favor foreign policy restraint should continue to insist on his purge. Doug Bandow, a Reagan alum, writes Thursday in The American Conservative: “Most dangerous is Bolton.”

Curt Mills is foreign-affairs reporter at the National Interest, where he covers the State Department, National Security Council and the Trump Presidency.