The Brutal Tragedy of Idlib: Why the U.S. Should Stay out of Syria and Dump NATO 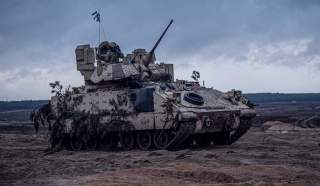 Syria is attempting to bring its civil war to a bloody end near the northwest city of Idlib. Syrian forces have clashed with Turkey, which invaded its neighbor and created a secure, jihadist-controlled enclave. Russia backed Damascus’ offensive, as Ankara urged NATO to deploy Patriot missiles. The Trump administration faces pressure from war-happy legislators such as Sen. Lindsey Graham, who is campaigning to impose a no-fly zone in an ongoing civil war.

The United States should stay out of the explosive confrontation. Instead of getting more involved in a civil war now in its tenth year, the Trump administration should bring home America’s troops now illegally occupying Syrian oil fields. And Washington should turn the transatlantic alliance over to the Europeans, ensuring that Americans stay out of any Turkish conflict with Syria and Russia—especially one created by Ankara’s aggression against its neighbor.

Syria dissolved into civil war nearly a decade ago. However, the Assad government has been gradually extending its control over once rebel-held lands. The process is not easy: the regime has been badly weakened by years of fighting and opposition has revived in some areas, such as Daraa, a trigger for the initial civil war. Nevertheless, Damascus recently launched an offensive to reclaim Idlib, a major city swollen with refugees who fled fighting elsewhere in Syria.

Idlib is an extraordinary tragedy, the last insurgent controlled region, in contrast to other areas under Kurdish, Turkish, and American control. With Turkish support the insurgents, including Hayat Tahrir al-Sham, formerly Jibhat al-Nusra, and other radical Islamist groups, cut the major M5 highway. The al-Qaeda-linked al-Sham eventually gained control of the city and environs.

Turkey, committed to the overthrow of Syrian president Bashir al-Assad, supported the opposition and warned Damascus off from advancing on Idlib. As part of a cease-fire negotiated through Russia Turkey established a dozen military observation posts and later added additional deployments intended to act as tripwires to discourage Syrian military advance. However, the ceasefire ultimately failed and Damascus recently began large-scale operations against Idlib. Syrian armed action always seemed inevitable: after all, multiple governments in Ankara employed brutal military force against Kurdish separatists.

Damascus quickly made progress, recovering control of the M5. But the fighting displaced hundreds of thousands of Syrians, many of whom headed for Turkey. Most seriously, Syrian or Russian airstrikes (blamed on the first, more likely by the second) killed thirty-three Turkish soldiers. Moscow claimed that the latter were operating with “terrorists” and “terrorist fighting units,” meaning insurgents, which Ankara denied. However, wrote Joseph Trevithick of The Drive: “Turkey, together with its local partners, has been attacking regime ground and air forces for weeks now, including with armed drones, as it seeks to stem the offense in Idlib. The Turkish government has stepped up deliveries of heavier weaponry, including armored vehicles and howitzers, to various Syrian militant groups opposed to Assad, as well.”

With the potential for a full-scale armed confrontation and even war between Turkey and Syria backed by Russia, Ankara, a NATO member, called on its allies, including America, for consultations and support. Despite Turkish president Recep Tayyip Erdogan’s sustained campaign to tyrannize his people and separate his country from the West, the allies so far have lined up behind him.

NATO Secretary General Jens Stoltenberg announced “full solidarity” with Ankara and said the allies were “constantly looking into what more they can do to provide further support for Turkey.” The alliance denounced “indiscriminate airstrikes by the Syrian regime and Russia.”

So far, NATO’s aid means enhancing NATO reconnaissance missions over the border area and considering deployment of Patriot air defense missiles. However, Greece blocked the issuance of a statement backing Ankara. But if hostilities explode Turkey likely will call on NATO to invoke Article 5, which states that an attack on one member is an attack on all.

Of course, the alliance will act seriously only if Washington agrees. Thus far, the Trump administration has encouraged Ankara. For instance, the State Department declared: “We stand by our NATO ally Turkey and continue to call for an immediate end to this despicable offensive by the Assad regime, Russia, and Iranian-backed forces. We are looking at options on how we can best support Turkey in this crisis.” Washington’s UN Ambassador Kelly Craft said “the United States’ commitment to our NATO ally, Turkey, will not waver. Turkey has our full support to respond in self-defense.”

So far few specifics have been offered. Pentagon spokesman Alyssa Farah explained: “We are exploring ways the United States can work together with Turkey and the international community.” Ideas include increased information sharing, logistical aid, and other forms of non-combat support, as well as maintaining equipment readiness. The special envoy on ISIS, James Jeffrey, recently opined that the president said his administration might provide ammunition.

Washington’s ivory tower warriors, who have pushed for U.S. involvement in the Syrian civil war for a decade, have returned to their traditional panacea, a no-fly zone. Argued Graham, who rarely has found a war he did not want others to fight: “The world is sitting on its hands and watching the destruction of Idlib by Assad, Iran, and the Russians. This is one of the greatest humanitarian disasters in decades and the brutal aggression of Assad supported by Iran and Russia needs to come to an end.”

Of course, there is much in the world which “should” happen. But only rarely does that justify war. The United States has the strongest military on earth, leading many policymakers to assume that every problem is solvable by bombing, invading, and/or occupying other nations. Yet America’s experience over the last two decades with endless war, often conducted with a humanitarian gloss, has been a little short of disastrous.

Washington’s carte blanche to Saudi Arabia enabled the latter’s horrific aggression against Yemen, which has aided al-Qaeda in the Arabian Peninsula, long the most virulent affiliate of the national organization which staged 9/11. And the Obama administration’s insistence that al-Assad be removed from office discouraged negotiation by both Damascus, which saw little reason to talk, and its critics, who expected U.S. support for its maximalist demands.

Washington’s simultaneous attempt to oust Assad, support “moderate” insurgents, defeat ISIS, exclude Iran from Syria, minimize Russian influence, simultaneously ally with Kurdish militias and accommodate Turkish interests, proved to be a fantasy. To jump into Idlib would be to risk everything for much less.

Indeed, DC fantasies still live. Graham argued: “I am confident if the world, led by the United States, pushed back against Iran, Russia, and Assad that they would stand down, paving the way for political negotiations to end this war in Syria.” Such a vision suggests that the senator has been ingesting LSD or an equivalent. “The world” spent ten years urging an end to the Syrian civil war, without effect. Most of “the world” is quite willing to leave such crises to America.

The problem with a no-fly zone, and any other military measures which Turkey’s advocates might offer, is that it means shooting at Russians. Over Syria Moscow’s forces dominate the air and, contra Lindsey Graham, are not likely to back away because he and “the world” want the Russians to do so. Moscow has allied with Damascus for decades, starting during the Cold War. Putin proved that he is perfectly able and willing to play a robust game of geopolitical chicken.

For Washington to risk war with Russia over Syria would be a little short of insane. Damascus does not matter and never has much mattered for U.S. security. Syria never gave the Soviet Union an adequate base to challenge American influence in the region and eventually abandoned even military confrontation with Israel. Attempting to turn Syria into a battleground with Iran is merely another step in a counterproductive strategy that has worsened regional tensions and will fail so long as Damascus welcomes Tehran’s support.

Syria remains a humanitarian tragedy, but the worst of the decade-long civil war is over. The best, most humane, outcome is to end the fighting. However, Turkey, by bolstering the insurgency—and threatening to intervene more directly—is lengthening the conflict and the corresponding hardship. That is in keeping with Ankara’s murderous intervention against Syrian Kurdish forces. Ironically, Turkey is justifying its efforts to protect the radical forces which dominate Idlib as an attempt to forestall future “radicalization.”

Proposals to intervene on Turkey’s behalf offer a stark reminder of the problem of NATO, an organization created in a different time and circumstance. During the Cold War the transatlantic alliance was used to forestall Soviet aggression against Europe, a continent for which Americans shed significant blood to liberate in World War II. Since the collapse of the USSR, the alliance has had no serious purpose, since Europe is well able to protect its own members and surrounding territory. The expansion of NATO has proved to be highly destabilizing, encouraging the Putin government to act against Georgia and Ukraine, preventing their inclusion in the alliance already abutting Russia.