Is the Bulletin of Atomic Scientists Legendary Doomsday Clock Wrong? 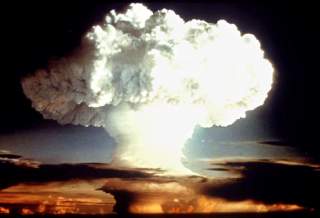 Since 1947, the Bulletin of Atomic Scientists has used the Doomsday Clock to monitor the very threats that could ruin the planet and kill off human civilization. It’s about as grim a job as anyone can perform, but the Bulletin’s Science and Security Board has felt the urgent need to do it. The mission: to scare leaders and stakeholders in national governments and international organizations straight before the clock strikes midnight.

The Bulletin published its Doomsday Clock statement today, and it couldn’t be any more bone-chilling. The combination of nuclear proliferation, climate change, and disinformation operations has resulted in a reality where a single act of miscalculation could have world-changing effects.  “In the nuclear realm,” the Bulletin writes. “national leaders have ended or undermined several major arms control treaties and negotiations during the last year, creating an environment conducive to a renewed nuclear arms race, to the proliferation of nuclear weapons, and to lowered barriers to nuclear war.”  The Board’s assessment: “the international security situation is now more dangerous than it has ever been, even at the height of the Cold War.”

These warnings can sound alarmist. We are no longer living in the Cold War, some will say. Children aren’t doing duck-and-cover drills in their classrooms anymore. Two nuclear superpowers with tens of thousands of warheads apiece are not a whisker’s throw away from a nuclear confrontation. Nuclear armageddon is hardly on the minds of the American people, who are more preoccupied with finding a way to address rising health care costs and wondering when they will finally get a raise. And you can’t blame them.

But as the Bulletin makes clear, problems traditionally classified as long-term issues are now at risk of becoming near-term crises. Climate change isn’t going away. Disinformation operations are not a Kremlin phenomenon, but a playbook dozens of countries around the world are using to gain an advantage and throw their adversaries off-balance. As far as the nuclear realm is concerned, agreements once thought to be semi-permanent fixtures of the international security landscape are now unraveling in broad daylight like a deck of cards.

A quick overview of the strategic stability architecture reveals a disturbing pattern: arms control accords are now an endangered species.

The Joint Comprehensive Plan of Action, the 150-plus page agreement that provides the International Atomic Energy Agency with unprecedented access to every nut and bolt of Iran’s nuclear program, is gasping for what little air is left in the tank (Britain, France, and Germany are reportedly prepared to extend the dispute resolution mechanism used to adjudicate complaints well into next month in order to buy more time). But if Washington doesn’t play ball with the Europeans, it’s only a matter of time before Tehran decides to leave the deal altogether. Iranian Foreign Minister Javad Zarif’s threat that Iran will withdraw from the Nuclear Non-Proliferation Treaty if the Europeans kick the problem to the U.N. Security Council doesn’t give us a whole lot of confidence that events can be salvaged.

U.S.-Russia arms control talks aren’t exactly making much progress either. While Washington and Moscow did send representatives to Geneva on January 16 for the Strategic Security Dialogue, the two nuclear superpowers are still far apart on a long list of issues, from the disposition of long-range ballistic missiles to whether missile defense should be included in future negotiations.

Talks on New START remain nonexistent.  The Russians have been beating Washington’s door and screaming at the top of their lungs about their willingness to extend the treaty without conditions for another five years.  President Vladimir Putin, Foreign Minister Sergey Lavrov, and Deputy Foreign Minister Sergey Ryabkov have all said so in public.  But as Ryabkov told the Interfax news agency last December, the Trump administration has not responded to Moscow’s offer.  The administration is still obsessed with the mirage of bringing China into a new trilateral arrangement, effectively holding the last nuclear accord between the U.S. and Russia hostage on behalf of a mirage in the desert.  The fact the Chinese have stated their opposition to Washington’s proposal, again and again, doesn’t seem to have changed the White House’s position.  It leads one to question whether Trump was even interested in extending New START in the first place.

Some experts will take issue with the tone of the Bulletin’s latest statement. Eric Gomez, a policy analyst at the Cato Institute and a leading authority in the field, tweeted that while escalation is always a concern, “the nuke risks of today are much less severe than in Cold War.” Nobody is predicting a 21st-century Cuban Missile Crisis in the foreseeable future.

But if the Bulletin teaches us anything, it’s that you don’t need a direct nuclear stand-off to creep towards armageddon. Miscommunication and broken guardrails will do just fine.