Is China or Fear of China the Greater Threat? 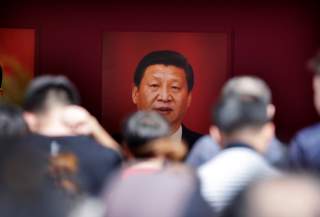 America looked at Imperial China as a potentially limitless consumer market. Washington sympathized with the republic under the Nationalists against Imperial Japan. Post-World War II China under Mao Zedong turned into a serious threat, eventually second only to that of the Soviet Union.

Instead, after the crackdown in Tiananmen Square China adopted an unstable system of loose authoritarianism. Although challenging Chinese Communist Party control would result in prison, more general discussions of political and policy topics were tolerated, at least in academia. Foreign contacts expanded significantly. A semi-independent press developed, which could challenge local government malfeasance. Protests against abusive local officials were common. The CCP’s reputation crashed as corruption burgeoned.

Now, President Xi Jinping is pushing the PRC rapidly in the opposite direction. Concerned about the party’s declining authority, he has imposed an increasingly totalitarian system—one which Mao likely would admire, especially its technological innovations. Among its fearsome features: forcing a million or more Muslim Uighurs into reeducation camps, crushing the slightest public hint of dissent, and imposing a “social credit” system designed to regulate all personal behavior.

At the same time, the economic relationship with America is foundering. While it should surprise no one that authoritarian Beijing subsidizes and manages its industries, the PRC also has engaged in commercial espionage, tolerated the widespread theft of intellectual property and discriminated against U.S. firms. Companies which missed the promised bounty from Chinese investment now applaud the Trump administration’s trade war or abandon the Chinese market altogether.

The PRC also has grown more aggressive internationally. Although Beijing does not threaten fundamental American security—no one imagines a Chinese assault on the U.S. homeland—it is mounting a significantly greater challenge to American influence in East Asia. China is creating a military capable of challenging Washington’s traditional dominance of East Asia up to the PRC’s borders. Beijing has taken an increasingly assertive position toward its neighbors over territorial disputes, more ruthlessly sought to increase its power over Taiwan and Hong Kong, and launched the “Belt and Road” initiative to gain economic clout and create potential military bases around the world. The PRC also has moved closer to Russia to counter Washington.

The result is a growing perception of “The China Threat.” The Cold War yielded a political consensus that the Soviet Union posed a serious danger that had to be contained. Republicans and Democrats often disagreed over policy details, but joined to support alliances such as NATO, fight wars including Korea and Vietnam, and oppose Soviet-backed insurgencies and governments throughout the Third World.

The Soviet collapse yielded a world in which America had no peer competitor. Even as the PRC grew economically, most Americans perceived little threat. For years Beijing emphasized its “peaceful rise” and its military power remained modest at best. Both of those factors have changed, however. Concern increasingly has turned into fear, stoked by President Donald Trump’s rhetoric and trade war.

Serious voices now advocate treating Beijing as an enemy, or something very close. A tone of regret has emerged at having allowed China into the World Trade Organization and developed a close commercial relationship with the PRC. The result, it is increasingly suggested, is aiding a dangerous authoritarian state that is fundamentally hostile to American interests and principles.

Some policymakers therefore seem determined to make up for lost time by challenging China. The president’s trade war has moved beyond a simple economic dispute. The president ordered by tweet—whether he was serious is tough to assess—all American companies to leave the PRC. Some legislators advocate sanctions for a range of perceived offenses, from security clashes to human rights violations. A number of conservatives even advocate breaking the economic relationship to weaken China.

Not quite a declaration of war, such a policy undoubtedly would be perceived as hostile and threatening in Beijing. The result would be a rapidly deteriorating relationship, far more contentious in political and military matters. Treating the PRC as an enemy would do much to turn it into an enemy. This strategy could be justified only as a last resort, with no realistic chance for a peaceful, cooperative relationship.

Yet despite governmental tensions, the two countries remain close. Hundreds of thousands of Chinese students are studying in America. Millions of tourists go in both directions. Academic exchanges, though complicated by visa requirements and other restrictions on both sides, continue. Extensive commerce, though battered by trade restrictions, persists. Despite the president’s edict via tweet, most U.S. firms have not run for the exit. Members of the two nations’ militaries meet.

Chinese communism is practical, cynical, even fraudulent. With capitalists joining the party, wealth accumulating, foreign firms driving growth, and government officials focusing on power preservation, the CCP looks far closer to fascism than communism. The U.S.-PRC trade spat is more mercantilism than ideology. This is very different from the Cold War. Thus, America’s response should be different than during the Cold War.

The PRC faces serious challenges: slowing growth in a debt-heavy economy, demographic disaster with an aging population, social divisions exacerbated by regional inequities, burgeoning trade war undertaken by the world’s largest economy, costly consumer and business failures resulting from pervasive corruption and fraud, rising dissatisfaction among partners with Beijing’s Belt and Road initiative, and growing international challenges from countries and territories spanning Asia to Europe. Even Chinese officials have been surprised at the breadth of the hostile response to Chinese policy, complaining of China-bashing. The PRC is likely to be a great and, eventually, perhaps, the greatest power. However, the path ahead is likely to be rough and Beijing’s future is not assured.

Finally, the PRC is not irredeemably “lost,” in the sense of being hostile, totalitarian, and threatening. We do not know that nation’s future. Economist and Bloomberg columnist Tyler Cowen pointed to a long list of past erroneous predictions about China’s course, citing the saying “China will always surprise us.”

Indeed, evaluating the PRC requires asking “compared to what?” From 1949 through around 1976 under Mao, China was a humanitarian hellhole. Immediately after the revolution came brutal political, economic and social upheaval, highlighted by a tsunami of punishments, reprisals and executions. The Great Leap Forward was a national jump into the abyss, with mass starvation and death. Then the Cultural Revolution mixed purge, feud and civil war. All along the Chinese people suffered under an idiotic collectivist economic ideology that failed in practice everywhere.

This world, thankfully, is gone. The PRC that emerged from the reform process after roughly thirty-five years was vastly different. While not a free society, its people were much freer. And there was good reason to hope for a reemergence of the liberalism that was sidelined after the slaughter in Tiananmen Square.

Alas, this world also has disappeared. And almost entirely at the hands of one man: Xi Jinping.

He has been extraordinarily effective in extending his authority. However, his ascent up the mountaintop has left him at the precipice. His enemies are legion; anyone purged or punished, or associated with his predecessors, would like to take revenge. By dismantling presidential term limits Xi has inflamed fears he will become another Mao. Evident is high level discontent with his approach to the trade war and contentious territorial policies in the Asia-Pacific. There also is a popular opposition, obviously difficult to measure, to increased censorship, religious persecution, NGO closures, abuses of power and other human rights violations.

Finally, if Xi could turn the system one way, his successors could go in another. That he feels it necessary to push repression so far demonstrates the limits on support for his hardline position. There is nothing certain or predetermined about the PRC’s future course.

It is worth remembering that on January 1, 1989, few of even the most experienced European analysts imagined that, by December 31, the entire Soviet empire in Europe would have collapsed. It was a time of shock and awe at the unexpected end of what Ronald Reagan accurately called an “evil empire.” In another couple of years the Soviet Union would be gone. The USSR and its satellites had obvious weaknesses, but the authoritarian systems had deployed more than enough weapons of repression and tyranny to survive for decades. Those standing for freedom appeared to face overwhelming odds. Serious popular challenges were crushed by overwhelming force: Poland in 1953, Hungary in 1956, Czechoslovakia in 1968, Poland in 1981. Mikhail Gorbachev’s rise gave hope of reform to the West, but no one expected his nation’s dissolution. We should not presume the future.

Moreover, the PRC already is being forced to adapt. For instance, Xi’s aggressive foreign policy has been surprisingly maladroit, driving East Asian nations toward not just America but India and Japan. Taiwan probably always was lost to China, but the latter’s unremitting repression has dramatically widened the gulf. The only option, military action, would create extraordinary blowback. Beijing’s determination to rule has sparked mass demonstrations against CCP control in Hong Kong. Those who know China the best most decisively reject its professed affections.